Technology & Marketing Law Blog and the Delaware Employment Law Blog took note of a couple of retaliation claims against defendant Coyote Ugly (“that’s right—the one from the movie, where hot bartenders dance on the bar,” Delaware employment lawyer Molly DiBianca writes) that survived summary judgment. The underlying suit is a Fair Labor Standards Act one concerning allegations of an illegal tip-pooling arrangement.

The first claim involves a post by Coyote Ugly’ founder at her Lil Spill blog in which she notes she’s being sued by someone who was “terminated for theft.”

The second claim involves a Facebook status update by Coyote Ugly’s director of operations—posted while he was at an anniversary party at the Coyote Ugly location that another plaintiff in the FLSA case worked at—“Dear God, please don’t let me kill the girl that is suing me … that is all …” The Facebook post was taken down within 24 hours, but because the director and that plaintiff were Facebook friends, she saw the update within an hour of its posting.

What do you do if you have a client who tends to prolong meetings with “conversation that doesn’t advance the ball”? Houston-based law practice management consultant Debra Bruce, logs in some advice at Solo Practice University on how to end meetings with clients at a reasonable time.

“If you work on a flat fee basis and have other business you could be working on, you may sense your profits draining away as the minutes tick by,” Bruce writes “Even if you bill on an hourly rate, you don’t want your fees to mount up without a concordant measure of productivity and value.”

Lawyers can compile a list of frequently asked questions, post them on their websites and present clients with the list to refer to at a meeting. Lawyers can also send them home with a checklist or explanation of the steps they will be responsible for taking and the documents they will need to provide, she writes. “Knowing that they can peruse the FAQs and checklist later may provide clients with the security they need to wrap up the meeting more quickly.”

But this isn’t to say lawyers should streamline emotional support out of their practices. “The hand-holding you provide may keep you from being replaced by Legal Zoom in the way that TurboTax usurped the business of many tax preparation services,” Bruce writes. “Clients appreciate a lawyer who demonstrates patience and respect for them as they deal with a situation that feels foreign and daunting.” 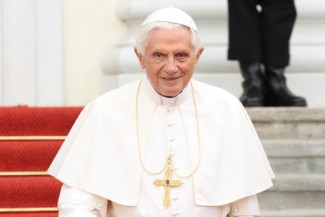 To whom does the pope submit his resignation? No one, according to Canon 332 §2. “As the Pontiff has no hierarchical superior within the Church, from the ecclesiological and juridical viewpoints, no acceptance of the Pontiff’s resignation is necessary for the resignation to take effect,” Figueroa writes.

What will the pope’s title be, once he resigns? Canon law isn’t clear, Figueroa writes. But he notes a recent interview in which canon law professor Monsignor Patrick Valdrini says that Benedict will probably assume the title of Emeritus Bishop of Rome.

Previous:
Drew Peterson gets 38 years for murder of 3rd wife

Next:
Gun owner liability insurance would be mandatory under proposed laws