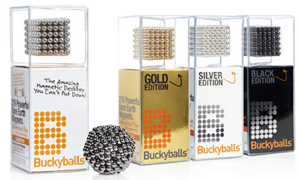 Image released by the CPSC.

The Consumer Product Safety Commission, stymied in attempts to get a manufacturer to foot the bill, persuaded several prominent retailers to voluntarily join the agency in a recall of Buckyballs, the super-magnet desk toys which have seriously damaged the intestines of children who swallow them.

The CPSC sought the cooperation of retailers after the manufacturer of Buckyballs abruptly dissolved the company late last year. The agency tried unsuccessfully to get the former CEO of Buckyballs to pay for the recall, and has sued the corporate parent, Maxfield & Oberton, in an administrative complaint. In a highly unusual move, the complaint was amended to name company co-founder Craig Zucker as an individual and as a “responsible corporate officer.”

It was the first such suit brought by the sometimes beleaguered agency in 11 years. (For more an in-depth look at the CPSC’s origins, rocky history and the Buckyballs controversy, see a feature in the May issue of the ABA Journal titled “Should this toy be saved?”)

Zucker had worked closely with the agency on repackaging of the product with prominent warning labels and in consumer education campaigns, but the CPSC moved to ban the product last summer because of the growing number of serious incidents. When children swallow them, the rare-earth magnets—exponentially stronger than typical ones—pull toward each other with such force that they can close or tear the intestines.

The CPSC said in its complaint that, “Warnings are ineffective because parents and caregivers do not appreciate the hazard.”

The original six major retailers that agreed to join the recall—and foot the bill for their own costs in doing so—include Barnes & Noble and Bed Bath & Beyond. They soon were joined by Toys R Us and Overstock.com.

The CPSC has pending administrative lawsuits against two other manufacturers of similar magnet toys, Zen Magnets and Star Networks.