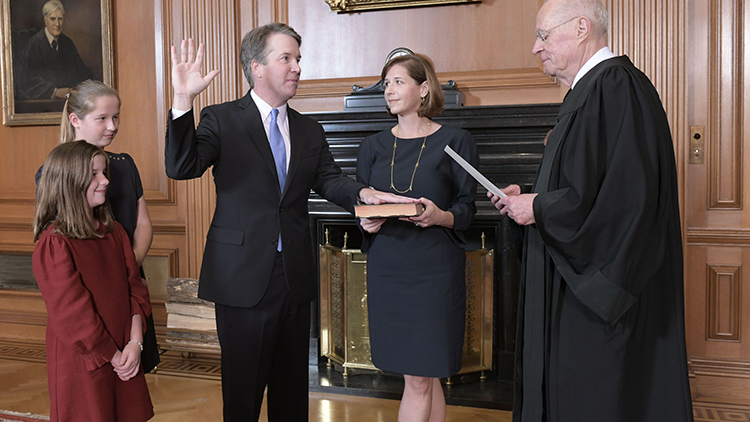 Retired Justice Anthony Kennedy swears in Brett Kavanaugh at the Supreme Court as his wife Ashley holds the Bible. Fred Schilling/Supreme Court of the United States.

The U.S. Court of Appeals for the D.C. Circuit has received complaints about Brett Kavanaugh’s statements during hearings on his confirmation to the U.S. Supreme Court, according to a statement Saturday by a judge on the federal appeals court.

Kavanaugh joins the Supreme Court today after he was sworn in at a private ceremony on Saturday and a public ceremony on Monday, report the Wall Street Journal and the Washington Post in stories here and here. Kavanaugh was a judge on the D.C. Circuit for 12 years.

The statement said the D.C. Circuit complaints “do not pertain to any conduct in which Judge Kavanaugh engaged as a judge,” an apparent indication that the D.C. Circuit would not take any action on the complaints, the National Law Journal reports.

The statement said the complaints “seek investigations only of the public statements he has made as a nominee to the Supreme Court of the United States.”

Judge Karen LeCraft Henderson, the most senior judge in the circuit, issued the statement after the D.C. Circuit’s chief judge, Merrick Garland, apparently recused himself.

Four unnamed sources told the Washington Post that the D.C. Circuit sent the complaints to Chief Justice John G. Roberts Jr. According to the Post’s sources, Roberts has decided against referring the complaints to a judicial panel for investigation, at least for now.

The misconduct complaints concern Kavanaugh’s answers about his work in the George W. Bush administration and his comments about Democrats using allegations of sexual assault against him, according to the Post.

Legal experts told the Post the complaints may be dismissed. “If Justice Roberts sits on the complaints, then they will reside in a kind of purgatory and will never be adjudicated,” said New York University law professor Stephen Gillers.

During the public swearing-in ceremony, President Donald Trump apologized to Kavanaugh and his family “for the pain and suffering you have been forced to endure.” Kavanaugh said he joins the Supreme Court “with gratitude and no bitterness.”