El Paso, Texas, attorneys gathered at the Tornillo Port of Entry in Tornillo, Texas, to read the Declaration of Independence. Photos courtesy of Frank Chelly.

Since 2010, Robert Fickman has been helping to organize Fourth of July readings of the Declaration of Independence around the state of Texas.

And while Fickman and the Texas Criminal Defense Lawyers Association advise local organizers that they prefer not to get too political, it’s never been entirely apolitical. Fickman, a solo criminal defense lawyer in Houston, has used his readings to criticize judicial behavior toward people accused of crimes.

So when a group in El Paso asked for permission to do a reading in front of the Tornillo, Texas, tent city built by the federal government for immigrant minors, organizers were happy to say yes.

“The symbolism seemed to be appropriate,” Fickman said. “If the whole purpose of the declaration was a statement in opposition to tyranny and tyrannical behavior, what better place than a children’s prison camp where the children are not accused of committing a crime themselves?”

So on July 3, a small group took turns reading the declaration in front of the port of entry between Tornillo, a small town about 45 minutes outside of El Paso, and Mexico. El Paso criminal defense lawyer Frank Chelly says there were about 50 people in attendance altogether, mainly criminal defense lawyers—although they were there are private citizens, he cautions. Many headed straight from the event to a courthouse to take care of their afternoon dockets. 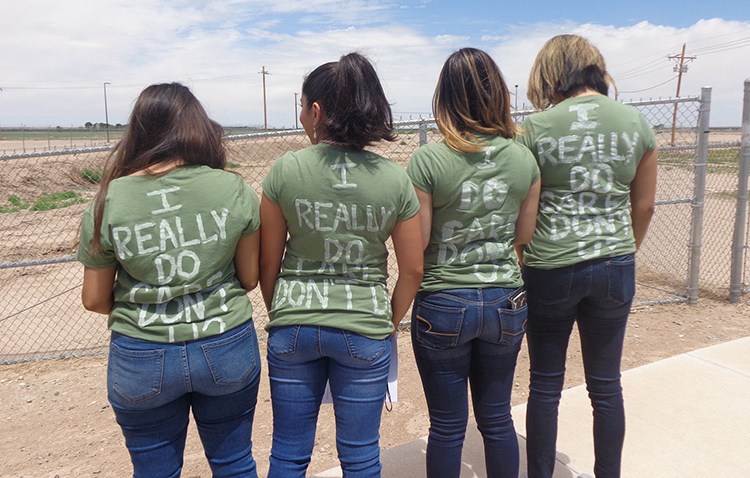 Chelly says the group wanted to do a reading in front of the tent city—which has attracted widespread attention along with the Trump administration’s decision to start separating immigrant children from parents—because members of the community were upset about its presence in their backyard. But they couldn’t do much to oppose it directly, Chelly notes—so they decided to try to draw public attention.

“That was really the goal, is to make sure that people know what’s going on,” Chelly said. “Ours was not a protest, it was just a reminder of why we do what we do as attorneys, and particularly as criminal defense attorneys. And the founding document, I think, is particularly relevant to that.”

In photos from the event, some of those attending are wearing green T-shirts that said, on the back, “I REALLY DO CARE, DON’T U?” This is a reference to First Lady Melania Trump, who wore a green jacket with the words “I REALLY DON’T CARE, DO U?” while on a visit to facilities for separated children in South Texas. Chelly says that was organized “sua sponte” by some of the attorneys.

The courthouse readings of the Declaration of Independence are now organized through the Texas Criminal Defense Lawyers Association. Fickman says that organization had readings in every Texas county in 2016, the 240th anniversary of the approval of the Declaration of Independence. Because Texas is so large, he says, that meant some attorneys had to drive to courthouses in multiple rural counties. Readings have also been given at courthouses in Alabama, California, Georgia, Michigan and Mississippi, Fickman says. A friend of his even read it in London one year, next to the tomb of Britain’s King George—the intended audience of the original declaration.

Fickman says the reading was quite moving the first year.

“It was an amazing experience,” he says. “These are hard-boiled defense lawyers; they’re not sappy kinds of [people]. Everybody was quite moved by it.”