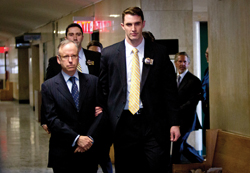 Dewey & LeBoeuf inflated bills sent to clients the law firm didn’t expect to ante up, in order to increase the amount of booked receivables, a former director of the billing department says.

Testifying Monday in a criminal trial against three former leaders of the bankrupt firm, cooperating witness Lourdes Rodriguez said a number of the bills were for deal-related work that was actually performed. However, clients in those matters were supposed to be charged only when and if the deal closed, reports the Am Law Daily (sub. req.).

Another invoice was created, in 2011, for a company that she had been told in 2009 no longer existed, Rodriguez testified. She is expected to continue her testimony Wednesday.

One of seven former employees of the firm who pleaded guilty and promised to cooperate with prosecutors, Rodriguez told the jury the government agreed to recommend an unconditional discharge if she meets her side of the bargain.

ABAJournal.com: “Defense in Dewey leaders’ trial blames disloyal partners who ‘picked up their marbles and ran’”