Disbarred lawyer F. Lee Bailey, who took on the 'demons of society,' dies at 87 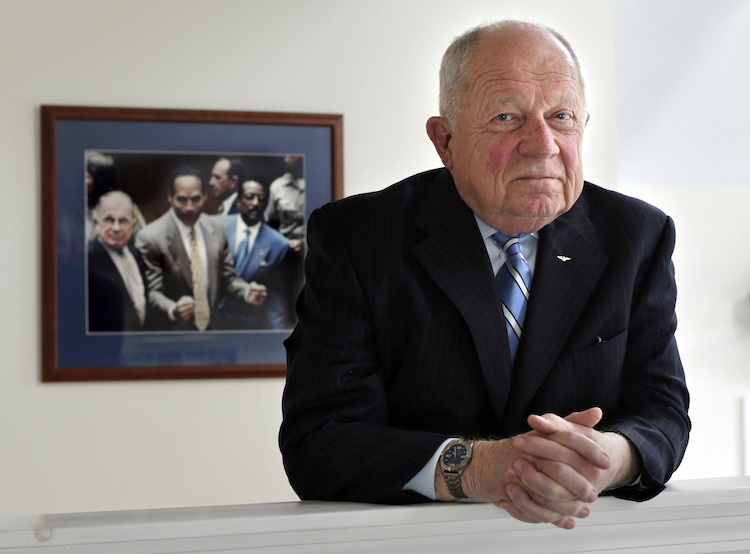 In this 2014 file photo, famed defense attorney F. Lee Bailey poses in his office in Yarmouth, Maine. Bailey defended former football running back O.J. Simpson, but his legal career halted when he was disbarred in two states. He died Thursday at age 87. Photo by Robert F. Bukaty/The Associated Press.

Bailey’s son, Bendrix Bailey, confirmed the death but did not give a cause, according to the Washington Post and the New York Times. TMZ also has coverage.

Bailey was known for his defense work for former football running back O.J. Simpson, newspaper heiress Patty Hearst, osteopath Dr. Sam Sheppard of Ohio, confessed Boston strangler Albert DeSalvo and the army commander at the My Lai Massacre in Vietnam.

Bailey won a retrial in the Sheppard case before the U.S. Supreme Court because of the “carnival atmosphere” at the first trial. The television show and movie The Fugitive drew from the case.

Steven Brill, a former publisher for the American Lawyer, once said Bailey was “an enduring legal figure in the sense that he’s been willing, and in fact relished, taking on clients that were the demons of society,” according to the Washington Post.

In a 2019 interview with the HuffPost Highline, Bailey insisted that the acquitted Simpson was innocent of the murder of his wife, Nicole Brown Simpson, and her friend, Ron Goldman. Bailey said the former football player’s wife was murdered in a mistaken hit intended for another woman, and Goldman was “just very unfortunate.”

Simpson posted a video calling Bailey a great friend, a great guy and “one of the great lawyers of our time.” Simpson said Bailey had finished a book about Simpson’s trial this week that included some information unknown to the public.

Bailey was disbarred in Florida in 2001 for his handling of stock owned by a drug dealer client. His reciprocal disbarment in Massachusetts followed shortly afterward. In 2014, Maine’s Supreme Judicial Court turned down Bailey’s quest to obtain a law license in that state.

Bailey filed for bankruptcy in c, listing his assets as a car worth less than $2,000, personal property worth less than $5,000 and a condominium with a $365,000 outstanding mortgage. He owed more than $5 million to the Internal Revenue Service stemming from his failure to report income on sales of the drug dealer’s stock.

Lee attended Harvard University for two years, became a jet fighter pilot, briefly returned to Harvard and then was admitted to Boston University’s law school. He didn’t complete his undergraduate education before his law school admission, but he managed to graduate at the top of his law school class in 1960.

Before his death, Bailey ran a consulting business and lived with the operator of a hair salon. He was married four times.

I lost a great one. F Lee Bailey you will be missed. pic.twitter.com/6s8JI3OQVB