Today Dan Lukasik has a website called Lawyers with Depression and a part-time coaching practice for lawyers struggling with the issue.

But he wasn’t always public with his own experience with depression. Lukasik says he was 40 years old when depression took hold of his life more than 12 years ago. He was crying quite a bit, and unable to sleep well or concentrate. He was also managing partner of a four-partner firm. He tells his story at Everyday Health. 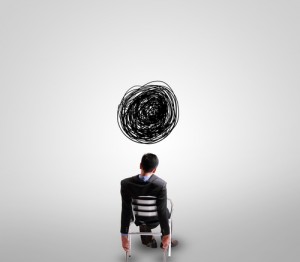 Lukasik’s doctor told him he had major depression and he should take three months off work to rest and adjust to medication. The next day, Lukasik met with the other partners and told them about his need for time off.

One partner suggested an alternative. “You’ve got so much going well for you in your life,” the partner said. “Why the hell don’t you go on a vacation?”

According to Lukasik, “The subtext was clear: If I’d only snap out of my funk and be more grateful, I wouldn’t be so depressed. Little did he know that I was depressed even when on vacation.”

Another partner told Lukasik that, even at 95 percent, he’s better than most lawyers. Lukasik replied he was at 5 percent, not 95 percent.

Lukasik writes that a worried look seemed to overtake the partner. “Perhaps he was troubled that I hadn’t replied appropriately to his compliment,” Lukasik says. “I also thought that his words were meant to diminish the problem. How could it be true? I looked the same as I had all along. There was just my representation that I had depression.”

Lukasik took the time off, and when he went back to the office he was able to deal more effectively with his depression. He decided to write an article for Trial magazine about his experience. A good friend who was a federal judge advised against it, suggesting Lukasik should write the article anonymously. Lukasik’s partners were also upset by the article.

But Lukasik found it freeing to be able to write about his depression and not hide it anymore. “If I had been sick with cancer or suffered a heart attack, would I write it anonymously?” Lukasik had asked his friend. Lukasik says that, though he still deals with depression, helping others has helped give him a sense of meaning and purpose.

ABAJournal.com: “Depression Is Rising as Lawyers Lose Jobs and Sense of Entitlement”