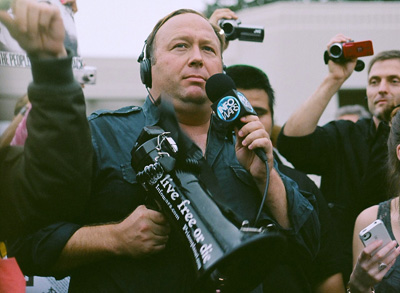 The lawyers said in a court filing this week that the initial discovery was made by consultants reviewing the files, report the New York Times, Courthouse News Service, BuzzFeed News, the Hartford Courant and the Connecticut Post. The families are suing Jones over his claims that the elementary school shooting that killed 26 people was a giant hoax.

The emails were among more than 56,000 documents turned over in discovery that included “Infowars” emails that referenced the Sandy Hook shooting.

According to the court filing, the lawyers contacted the FBI after consultants found one image of child pornography while loading files into a document review database. The FBI reviewed the documents and found numerous additional images that had apparently been sent to “Infowars” email addresses, according to the filing.

“It is worth noting that if the Jones defendants had engaged in even minimal due diligence and actually reviewed the materials before production, they would have found the images themselves,” the filing said.

After the FBI review, lawyers for the plaintiffs contacted Jones’ defense lawyer, Norm Pattis. Jones responded angrily in a broadcast of his show on Friday.

The court filing says Jones’ rant amounted to threats and asks the judge to review the video. The court filing includes some quotes from Jones, including this offer of a reward:

Jones also pounded a picture of plaintiffs’ lawyer Chris Mattei, according to the filing. “Chris Mattei. What a good American. What a good boy,” Jones said. “You think you’ll put on me, what—[under his breath]. I’m gonna kill … [growls]. Anyway, I’m done! Total war! You want it, you got it! I’m not into kids like your Democratic Party, you [expletive]!”

Pattis said on the radio show that Jones and his staff never opened the emails, some of which were “very hostile,” according to a review by Courthouse News Service.

“Clearly they were intended as malware,” Pattis said. He also said the FBI had cleared Jones of any wrongdoing, according to the New York Times.

Jones apologized for bad language a day after the show, according to BuzzFeed News. “I’m not saying that the lawyers for Sandy Hook families set this up or did this,” Jones said. “Whoever sent this, for whatever reason, this shows the escalation and the insanity of all of this.”

Pattis told the Connecticut Post that Jones was upset but there was no threat.

Judge Barbara Bellis of Bridgeport called Jones’ broadcast “indefensible” and sanctioned him Tuesday for suggesting he had been framed by plaintiffs’ lawyers, report Courthouse News Service, the Associated Press, CNN and the Connecticut Post.

Updated June 19 at 8:05 a.m. with information about the sanctions.