Does president's pardon authority extend to a self-pardon? 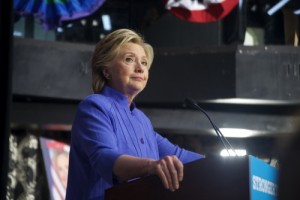 The FBI’s new look at emails that could have a link to Hillary Clinton had some observers playing out this what-if scenario: What if Hillary Clinton were indicted and elected? Could she pardon herself? Could President Barack Obama pardon her before leaving office?

FBI director James Comey told Congress on Sunday that the new emails hadn’t changed his conclusion that Clinton shouldn’t be charged over her handling of classified information, the New York Times reported. Before that news broke, the Wall Street Journal Law Blog and LawNewz consider the possibilities of a president who is indicted.

At issue is the Constitution’s pardon clause, which reads, “The president shall…have power to grant reprieves and pardons for offences against the United States, except in cases of impeachment.”

There is precedent for a pardon by Obama, according to the LawNewz post by George Washington University law professor John Banzhaf. In 1974, President Gerald Ford gave Richard Nixon a pardon for any crimes he may have committed against the United States while president. Ford reasoned the United States would be better off to put Watergate behind.

If Clinton were indicted and became president, she probably could pardon herself, according to Banzhaf. And if she did that, and someone wanted to challenge the pardon, it is doubtful any potential plaintiff would have standing to sue, he says.

Judge Richard Posner of the Chicago-based 7th U.S. Circuit Court of Appeals signaled agreement with that view in a 1999 book about the impeachment of President Bill Clinton. Posner wrote that “It has generally been inferred from the breadth of the constitutional language that the president can indeed pardon himself.” The Wall Street Journal Law Blog noted Posner’s stand.

Posner added that it was unlikely the Supreme Court at that time would be “bold enough, in the teeth of the constitutional language, to read into the pardon clause an exception for self-pardoning. Unlikely, but not inconceivable.”

Some law professors, however, have argued presidents may not self-pardon, the Law Blog adds. One of them, Michigan State University law professor Brian Kalt, argued in a 1996 law review article that self-pardoning conflicts with the structure, themes and principles of the Constitution.