Stormy Daniels’ lawyer, Michael Avenatti, is representing her in a suit seeking to invalidate a confidentiality agreement, but his public appearances go beyond a discussion of the legal issues about the deal signed by President Donald Trump’s lawyer, Michael Cohen.

The Washington Post says Avenatti has become one of Trump’s chief adversaries using tactics embraced by the president and his supporters. “Avenatti has carved a Trumpian path,” the article says. “He taunts his opponents. He uses Twitter to make explosive accusations. And he is omnipresent on cable news.”

The article goes on to question whether Avenatti’s tactics raise ethics issues and whether they could harm his ability to represent Daniels.

The article notes Avenatti’s Twitter release of a document that contained Cohen’s banking records, as well as some records of other people named Michael Cohen. The document revealed that Cohen received money from an investment firm with ties to a sanctioned Russian oligarch, and from consulting clients with matters before U.S. regulators.

Avenatti, a California lawyer, has sought to intervene on Daniels’ behalf in New York court proceedings involving the FBI’s seizure of materials in a raid of Cohen’s home, office and hotel room. Avenatti contends some documents relating to Daniels could be privileged, and he has sought permission to appear pro hac vice in the proceedings.

But lawyers for Cohen argue he should not be allowed to appear for Daniels because of his release of the banking records.

Amid Avenatti’s public campaign, articles have been published about his involvement in a coffee chain that filed for bankruptcy after the Internal Revenue Service filed liens of $5 million against the parent company. Other articles have noted a financial dispute with an ex-partner at his former law firm. 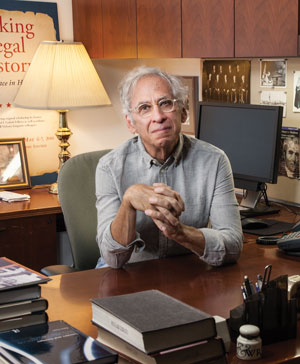 “Nothing he has been doing in the last four to six weeks with his multiple television appearances advances the interests of his client in the California action,” Gillers said. “He’s catapulted himself to be the story. There are dangers when a lawyer becomes so publicly vocal.”

Gillers said judges usually grant a lawyer’s request to appear in a state proceeding in which they aren’t licensed. But Avennati could prove an exception to the general rule. Lawyers cannot use or disclose documents that they know were illegally obtained, even if the lawyer did nothing unlawful to get them, Gillers said.

Avenatti told the New York court that he has a First Amendment right to publish information about matters of public concern. In an interview with the Post, he said the banking information was relevant to Daniels’ case because the money from Cohen’s clients flowed through the same account he used to pay Daniels.

Another legal expert, retired Harvard law professor Alan Dershowitz, said he had no problem with Avenatti’s aggressive strategy, as long as he has cleared it with Daniels.

“It really depends on what the client wants to accomplish, but I suspect that they’re in tandem,” Dershowitz told the Post. “I think she wants to take down the president.”

Avenatti told the Post that he acts in the best interest of his client, and his strategy is working. “We’ve created a situation where the other side continues to make mistake after mistake,” he says.