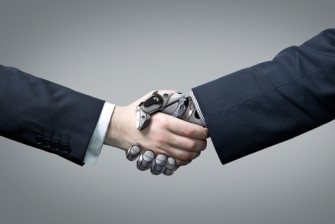 Automation is having an impact on the job market for lawyers, but the future isn’t as dire as some headlines predict, according to a new study.

The researchers analyzed law-firm billing data for the year 2014 provided by an analytics company and came up with this “ballpark estimate”: Lawyer employment would drop slightly more than 13 percent if automation is applied to law practice. The New York Times Bits blog has a story.

A 13 percent drop would pose a big problem if it occurred in one year, but that impact would have less of an impact if it occurs over a more realistic five-year time frame, the study says.

“Certainly, automation is having a significant impact on the labor market for lawyers and that impact will increase over time,” the study says, “but predictions of imminent and widespread displacement of lawyers are premature. A careful look at existing and emerging technologies reveals that it is only relatively structured and repetitive tasks that can currently be automated. These tasks represent a relatively modest percentage of lawyers’ billable hours.”

The researchers categorized tasks based on the percentage of lawyer hours that could be reduced by automation. Automated document review, for example, has a strong effect on lawyer employment, while automation would have a light effect on the tasks of advising clients, court appearances and negotiation.

Remus and Levy say that there will be an impact apart from lawyer employment numbers. Past developments show why.

“Word processing revolutionized document drafting,” the study says. “The Internet permitted rapid document transmission and video conferencing; accelerated the breakdown of law firms’ information monopoly on rates, services, and clients; and increased clients’ ability to spread legal work among multiple law firms. Email increased the speed and ease of communication both among lawyers and between lawyers and clients, and expanded the number of associates a single partner could supervise.”

The next wave of technology “promises similarly far-reaching effects,” the study says.