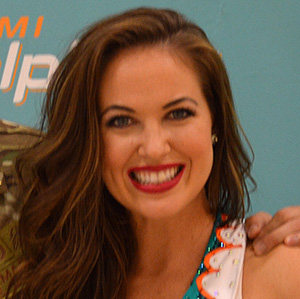 Former Miami Dolphins cheerleader Kristan Ann Ware filed a complaint against the team and the NFL earlier this month claiming she was discriminated against because of her religion and gender.

Ware’s complaint with the Florida Commission on Human Relations said she was subjected to a hostile work environment, ESPN reported, and that as a cheerleader she was held to different standards than players regarding social media and outward expression of her Christian beliefs. Ware was a cheerleader with the team for three seasons through 2017.

According to Law360, Ware said in her complaint that cheerleading director Dorie Grogan, other coaches and squad representatives harassed her after she posted a photo of her baptism on social media during the 2016 off-season.

The Washington Post reported Ware told her teammates during a bus trip conversation that she intended to remain a virgin until marriage because of her religious beliefs. Ware’s complaint said Grogan then told her she could talk about her virginity in private but never around the team. According to the complaint, when Ware told Grogan she shared the personal information only when asked, Grogan interrupted her and said: “As far as we are concerned, you have taken something that was once upon a time pure and beautiful, and you’ve made it dirty.”

Ware’s complaint claims that while both cheerleaders and football players represent the Dolphins, only players can express their religious beliefs in any manner they choose—via social media or even on-field prayer—without censorship or discipline. Ware said when she wrote a post for the team blog, it was edited to remove religious references.

“The NFL and all NFL member clubs support fair employment practices,” league spokesman Brian McCarthy said in a statement. “Everyone who works in the NFL, including cheerleaders, has the right to work in a positive and respectful environment that is free from any and all forms of harassment and discrimination and fully complies with state and federal laws.”

In a statement, the Dolphins said: “We are seriously committed to providing a positive work environment for everyone associated with the organization. We hold every member of our organization to the same standards and do not discriminate as it relates to gender, race and religious beliefs.”

Sara Blackwell, Ware’s attorney, told Law360 that it was “not abnormal” for NFL cheerleaders to face harassment and discriminatory policies. Blackwell also represents former New Orleans Saints cheerleader Bailey Davis, who filed an Equal Employment Opportunity Commission complaint last month, Law360 reported. Davis claims she was discriminated against when the Saints fired her over an Instagram post in which she was wearing an outfit the team claimed violated its rules and rumors she had been at the same party as a player.

Players have no rules about social media postings and are not punished for violating the team’s anti-fraternization policy, her complaint alleges.

The goal of Ware’s complaint is to get the Dolphins and NFL to revise their rules and enforce existing anti-discrimination and harassment rules, Blackwell told Law360.