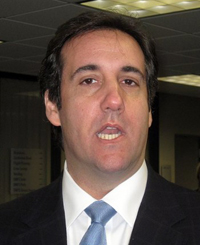 Updated: The FBI on Monday reportedly sought records on payments to two women who claimed they had affairs with Donald Trump when they raided the office and hotel room of Michael Cohen, the personal lawyer for President Donald Trump.

Several anonymous sources briefed on the investigation told the New York Times that the FBI sought records on payments to Stormy Daniels and to former Playboy Playmate of the Year Karen McDougal, who was paid $150,000 by the parent company of the National Enquirer.

Cohen has previously said he paid $130,000 to Daniels, who has alleged a sexual encounter with Trump. The payment to McDougal was intended to buy and bury her story about an alleged sexual affair with Trump, according to previous coverage. David Pecker, the chief executive of the National Enquirer’s parent company, American Media Inc., is a friend of Trump’s.

The new story builds on previous coverage by the Times, which broke the story on the raids. The Washington Post followed with its own story.

An anonymous source told the Post that Cohen is being investigated for possible bank fraud, wire fraud and campaign finance violations. Cohen was previously a lawyer for the Trump Organization, but left that position in January 2017 and became Trump’s personal lawyer.

Cohen’s lawyer, Stephen Ryan, confirmed the FBI raids. He said the government had seized privileged communications, and the search was “completely inappropriate and unnecessary.”

Ryan said Cohen has cooperated with authorities and has turned over thousands of documents to congressional committees investigating Russian influence in the 2016 presidential election.

Ryan said he was advised that the raids were the result of a referral by the office of special counsel Robert Mueller. According to the Times, the searches don’t appear directly related to Mueller’s probe of Russian influence, but likely precipitated by information uncovered by the special counsel. The U.S. Attorney’s office in Manhattan executed the search warrants.

An anonymous source briefed on the search told the Times in its initial story that many topics were being investigated. Seized records included emails, tax documents and business records. The seized records also included communications between Trump and Cohen, which would likely require a review to protect attorney-client conversations, the Times reported.

The raids were conducted in New York’s Rockefeller Center, where Cohen has an office at Squire Patton Boggs, and at a hotel where Cohen was staying while his apartment is being renovated, according to the Times.

Squire Patton Boggs had announced a “strategic alliance” with Cohen a year ago, but the law firm said Monday that the arrangement had “reached its conclusion, mutually and in accordance with the terms of the agreement.” The National Law Journal has a story.

“We have been in contact with federal authorities regarding their execution of a warrant relating to Mr. Cohen. These activities do not relate to the firm and we are in full cooperation,” Squire Patton Boggs said in a statement.

Trump told reporters at the White House later on Monday hat the raid is “a disgraceful situation,” Politico reports.

“I have this witch hunt constantly going on,” Trump said. “It’s an attack on our country in a true sense.”

Trump tweeted in all caps on Tuesday morning, “A total witch hunt!!!” He added in another tweet, “Attorney-client privilege is dead!”

According to the Times, the raids have “deeply unsettled White House aides, Justice Department officials and lawmakers from both parties, who believe the president may use it as a pretext to purge the team leading the investigation into Russia meddling in the 2016 election.”

In the 24 hours following the initial raid, Trump’s advisers have tried “to convince the president not to make an impulsive decision that could put the president in more legal jeopardy and ignite a controversy that could consume his presidency,” the Times reports, relying on anonymous sources.

Story was last updated on April 10.