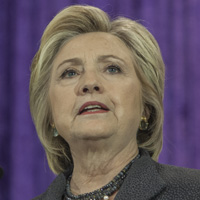 Updated: FBI director James Comey told Congress on Friday that the FBI will investigate new emails that appear to be relevant to its once-closed probe of Hillary Clinton’s use of a private email server.

Comey said in a letter that the FBI learned of the existence of the emails in connection with an unrelated case, report the Washington Post and the New York Times.

According to the New York Times, unnamed officials told the newspaper that the new emails were discovered after the FBI seized electronic devices belong to Anthony Weiner and his wife, Huma Abedin, a top aide to Clinton. Weiner was under investigation for allegedly sexting a 15-year-old girl, the Associated Press reported in September.

The FBI “will take appropriate investigative steps designed to allow investigators to review these emails to determine whether they contain classified information, as well as to assess their importance to our investigation,” Comey wrote.

Comey said he couldn’t predict how long it would take to complete the additional work and couldn’t assess at this time whether the new material may be significant.

The Washington Post calls Comey’s disclosure an “explosive announcement” that could shape the final days of the presidential campaign.

The FBI closed the Clinton email investigation in July with a recommendation that Clinton not be charged. Comey said at the time that Clinton and her staff were “extremely careless” in handling data, but “no reasonable prosecutor” would bring a case over the emails. Attorney General Loretta Lynch accepted the FBI recommendation.

In past cases involving the mishandling of classified information, Comey said in July, prosecutions “involved some combination of: clearly intentional and willful mishandling of classified information; or vast quantities of materials exposed in such a way as to support an inference of intentional misconduct; or indications of disloyalty to the United States; or efforts to obstruct justice. We do not see those things here.”

Updated at 3:45 p.m. to note that the New York Times’s report that the emails were uncovered after the seizure of Huma Abedin’s electronic devices is based on information from unnamed officials.