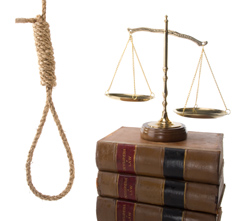 President Barack Obama’s commutation of Chelsea Manning’s sentence for leaking classified information got the most interest from the media on Tuesday, but a commutation in a capital case is getting the attention of lawyers advocating for better administration of the death penalty.

Obama commuted the death sentence of Abelardo Arboleda Ortiz to life in prison without the possibility of parole, according to Politico and this list published by the Washington Post. Ortiz and two others had been convicted of killing a drug dealer in 1998. The other men did not receive death sentences.

Arboleda Ortiz is intellectually disabled, but his trial lawyer didn’t investigate that disability and didn’t tell jurors about his client’s disadvantaged life, according to a statement by the inmate’s new lawyer, Amy Gershenfeld Donnella. His sentence was harsher than that of his co-defendants, though he wasn’t even on the same floor where the murder occurred, she said.

“Mr. Arboleda Ortiz’s case epitomizes the broken federal death penalty system,” Donnella said. “He is an intellectually disabled person of color with an IQ of 54 who was never able to learn to read, write, or do simple arithmetic, and could not even tie his shoes until he was 10 years old, as noted by the government’s own expert. …

“Mr. Arboleda Ortiz’s case highlights several of the glaring problems that plague the federal system no less than state systems: dreadful lawyering by defense counsel; disproportionate sentencing even among co-defendants; significant racial, economic and geographic disparities in the choice of those who will be tried capitally; and procedural constraints that make it virtually impossible to correct a conviction or sentence imposed, even in violation of the Constitution, when new evidence comes to light.”

Obama also commuted the sentence of a second death-row inmate, Dwight Loving, to life in prison without parole, report the Marshall Project and the Houston Chronicle. Loving was convicted in 1989 by a military court for killing two cab drivers in Texas.

The Marshall Project asked the White House why Obama decided to commute the sentences of the two death-row inmates, but the publication did not receive a response.

Updated on Jan. 19 to include information about commuted sentence for Dwight Loving.