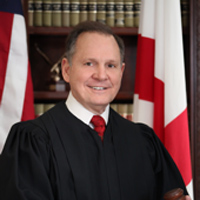 A federal judge in Alabama has dismissed a lawsuit (PDF) by suspended Alabama Chief Justice Roy Moore that sought reinstatement to his judicial office.

Moore was automatically suspended when Alabama’s Judicial Inquiry Commission filed ethics charges claiming Moore had failed to follow clear law when he ordered probate judges to enforce the state’s ban on same-sex marriage. Moore had issued the order after the U.S. Supreme Court found a constitutional right to gay marriage.

Moore had argued his automatic removal under the Alabama Constitution violates due process guarantees under the U.S. Constitution.

Albritton said he was dismissing the case under the Younger abstention doctrine, based on a 1971 U.S. Supreme Court case holding that federal courts not exercise jurisdiction to avoid interfering in ongoing state proceedings.

Moore was represented by Liberty Counsel, which says Alabama is the only state that automatically removes a judge from the bench after the filing of a complaint.