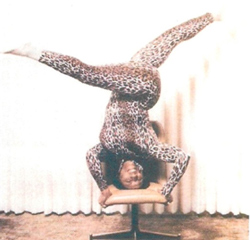 A strip club dispute has led a federal judge to wax philosophical, quote a 1960s song, make frequent use of double entendre, and enlighten his readers about “Miss Wiggles.”

“To bare, or not to bare, that is the question,” writes U.S. District Judge Fred Biery of San Antonio, who was previously in the news for a “non-Kumbaya order.” Above the Law notes his latest literary effort: an opinion denying a preliminary injunction to a strip club challenging a sexually oriented business law—an “SOB regulation,” to use Biery’s acronym.

“Plaintiffs clothe themselves in the First Amendment seeking to provide cover against another alleged naked grab of unconstitutional power,” Biery writes. “Plaintiffs, and by extension their customers, seek an erection of a constitutional wall separating themselves from the regulatory power of city government.”

In footnotes, Biery references the 1960 bikini song and, for those wondering about the meaning of “gentleman’s club,” he defines “gentleman.” He adds, however, that “the term is loosely used in this context.”

Biery says volunteers have performed site visits of the clubs in question. He suggests, however, that they “would have enjoyed far more the sight of Miss Wiggles, truly an exotic artist of physical self-expression even into her eighties, when she performed fully clothed in the 1960s at San Antonio’s Eastwood Country Club. Miss Wiggles passed Oct. 14, 2012, at the age of 90.” An accompanying photo shows a woman in a leopard skin leotard standing on her head on a chair.

Biery concludes the plaintiffs are unlikely to prevail under precedent upholding similar ordinances favoring businesses that clothe their dancers in more rather than less fabric.

The opinion ends this way: “The request for a preliminary injunction is denied. Should the parties choose to string this case out to trial on the merits, the court encourages reasonable discovery intercourse as they navigate the peaks and valleys of litigation, perhaps to reach a happy ending.”

35 Bar and Grille v. City of SA - Order Re Prelim Injunction Part I by Joe Patrice

Updated at 3:23 p.m. to embed Biery’s opinion and add a photo of Miss Wiggles.