Frances McDormand has people asking: What is an inclusion rider? 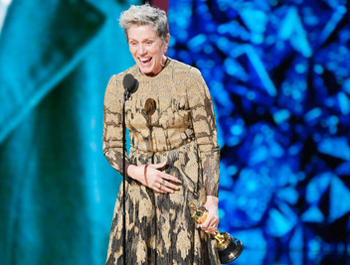 Frances McDormand accepts the Oscar® for performance by an actress in a leading role for work on “Three Billboards Outside Ebbing, Missouri” on Sunday in Hollywood, California. (John Farrell / A.M.P.A.S.)

Updated: Best actress winner Frances McDormand had some people scratching their heads Sunday evening when she ended her acceptance speech at the Oscars with two words of advice: “inclusion rider.”

McDormand, who won the award for her role in Three Billboards Outside Ebbing, Missouri, told reporters backstage that she just found out about inclusion riders last week, report E Online and ABC News. According to McDormand, the contract term means “you can ask for and/or demand at least 50 percent diversity in not only the casting, but also the crew.” The New York Times, Vanity Fair and the Washington Post also have stories.

Stacy Smith, the founder of the Annenberg Inclusion Initiative at the University of Southern California, developed inclusion riders. In a 2016 TED talk, she said the idea is to “reflect the world in which we actually live.”

“The typical feature film has about 40 to 45 speaking characters in it. I would argue that only eight to 10 of those characters are actually relevant to the story,” she said. “The remaining 30 or so roles, there’s no reason why those minor roles can’t match or reflect the demography of where the story is taking place.”

Smith told the New York Times that an inclusion rider might require the cast to be 50 percent female, 40 percent underrepresented ethnic groups, 20 percent people with disabilities and 5 percent LGBT people.

Smith worked with Kalpana Kotagal, a partner with Cohen Milstein’s civil rights and employment practice group, to develop the language for inclusion riders. They were introduced by Anita Hill, who is of counsel at Cohen Milstein, and they began promoting the concept to talent agencies in the fall.

Kotagal and Smith were completely surprised and thrilled when McDormand referred to inclusion riders in her speech. “It was absolutely unchoreographed,” Kotagal said in an interview with the ABA Journal.

Kotagal stressed that the inclusion rider is not a quota. “We certainly set guideposts and targets, but we definitely don’t dictate an outcome that would do anything but make the film more diverse,” she said.

“Let me say it a little bit differently. What we do is to encourage those who are engaged in hiring and casting to in fact hire and cast in a way consistent with a demographic. Do we require that? No. Is there wiggle room or a buffer? Yes.”

She declined to send a sample of the contract language to the ABA Journal, saying it represents work product. A fact sheet says the rider “sets clear goals for inclusion. It specifies the underrepresented groups to be included, defines a process for auditioning and interviewing, and sets objectives for casting and hiring.”

The rider creates financial consequences for studios that don’t engage in good‐faith efforts to interview and hire qualified individuals, according to the fact sheet.

Kotagal isn’t aware of an inclusion rider being used in any other industry. The closest example she could find was the National Football League’s Rooney Rule, which requires that at least one person of color be interviewed for head coaching jobs. Some law firms have embraced a version of the rule when considering lawyers for leadership roles.

Kotagal hasn’t heard of an inclusion rider being included in a movie contract—yet. As we speak, Kotagal told the ABA Journal, there are A-listers and production companies that are using the inclusion-rider language in contract negotiations.

I’m committed to the Inclusion Rider. Who’s with me? https://t.co/yvQ0wR5D80