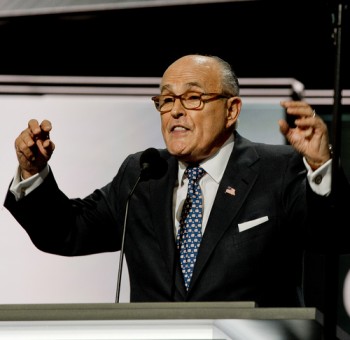 But a second statement by Giuliani during a Fox News interview Wednesday evening may have also caused legal problems for the president, the Washington Post reports.

Giuliani said one reason Trump fired FBI director James Comey was “because Comey would not, among other things, say that he wasn’t a target of the investigation.”

Giuliani also said, “He’s entitled to that. Hillary Clinton got that, and he couldn’t get that. So he fired him, and he said, ‘I’m free of this guy.’ ”

The statement undercuts the position that Trump fired Comey because of his handling of the probe into Hillary Clinton’s use of a private server for emails while she was secretary of state.

University of Michigan law professor Barbara McQuade told the Post that the statement could be damaging.

“Demanding that Comey make a public statement that Trump is not under investigation would itself potentially be obstruction of justice,” McQuade said, because it still could amount to interference in the Russia investigation.

Giuliani did not consult every member of Trump’s legal team before he spoke with Fox News, the New York Times reports. Nor did he consult with Trump’s newest lawyer, Emmet Flood, who previously represented former Bill Clinton in impeachment proceedings.

According to the Times, “People close to the president are concerned that Mr. Trump and Mr. Giuliani may create more problems for themselves if they consult only with each other and leave out the other lawyers who may know more about the nuances of the cases.”

Adding to the confusion, Trump told reporters on Friday that Giuliani only recently joined his legal team and, “He’ll get his facts straight,” the Times reports.

Trump’s reimbursement to Cohen could cause problems because the repayment could be viewed as a loan to the Trump campaign, which should have been reported.

Such a loan could also constitute a violation of the Ethics in Government Act, which requires the president and other officials to report liabilities of more than $10,000, the Times reports.

Giuliani released a statement on Friday saying the payment to Daniels was intended to protect Trump’s family and “would have been done in any event, whether he was a candidate or not,” the Post reports.