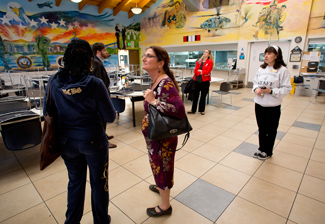 In 1981, five Vietnam veterans hatched a plan to mount an armed assault on the Veterans Administration building in San Diego. They were angry that the VA seemed indifferent to veterans’ physical and mental health, and concerned about increasing numbers of homeless Vietnam vets around the city.

But before they could execute that plan, Father William Mahedy, a former military chaplain who ran the counseling sessions, invited them to a meeting with a veteran who needed help. When the men arrived, they found there was no one else there—the “someone” who needed help was they themselves. Mahedy told the veterans to channel their energy into something that could truly make a difference.

That’s how Vietnam Veterans of San Diego—now, Veterans Village of San Diego—was born. Today, VVSD is a nationally recognized homeless-services provider that helps more than 2,000 veterans a year remove the legal, medical and practical barriers to living full lives. On Saturday, ABA members got a chance to learn more about those programs at a site visit to VVSD, sponsored by the ABA Commission on Homelessness and Poverty and arranged by Steve Binder, a deputy public defender for San Diego County.

Veterans Village, located north of downtown San Diego, is a “housing first” model, explained VVSD program director Shellie Bowman and clinical director Marilyn Cornell. That means veterans are housed before their addiction, mental health and employment problems are addressed—an approach that is starting to be recognized as more successful.

That doesn’t mean the program goes easy on them. After a month of assessment, VVSD clients are expected to spend full days working on their needs: physical and mental health, legal problems, addiction issues and more. Male veterans bunk in multi-person “squad bays”; females, because there are fewer, are housed with roommates. Everyone is expected to work on maintaining the community. After making progress on those problems, clients must work on identifying their job skills, building a resume and getting a job—or, if they can’t work due to age or disability, volunteering. In all, it takes nine months to two years to graduate. Some require more than one “tour.”

Veterans Village is also a community, with groups organized around the members’ interests, such as gardening, music and yoga. Claudia Castro, a retired Marine first sergeant who is the executive assistant to VVSD’s president and CEO, arrives at 6 a.m. several days a week to lead group runs and walks. As Castro showed the ABA group around the grounds, several residents were gathering to play guitars.

VVSD has an on-site homeless court run by the San Diego County Superior Court. Many of the charges reflect problems widespread among veterans—driving under the influence and domestic violence are two common ones. There’s also a weekly legal clinic run by students at Thomas Jefferson School of Law and an expungement clinic run by the law firm DLA Piper.

In addition to the housing program, VVSD runs a yearly Stand Down event for homeless veterans, which brings a variety of services to one spot for three days. Veterans can get anything from coffee and dentistry to addiction counseling and homeless court services. It’s been so successful that the event has spread to other cities. The San Diego version serves 1,000 veterans a year. In a video shown to the ABA group, several veterans said it was life-changing.

Cornell said Stand Down is one reason why she’s still working at VVSD, though she could retire.

“I get to watch magic happen,” she said. “Magic happens here.” 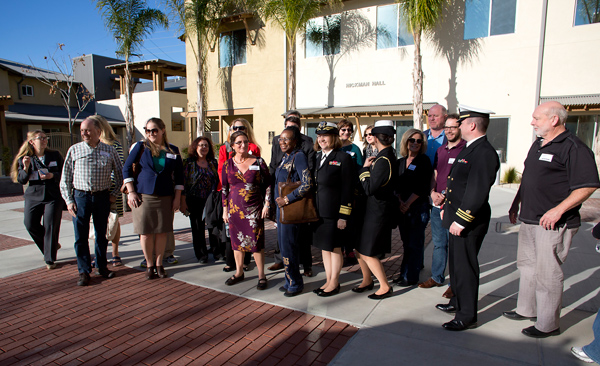 ABA members gather for a group shot during a tour of the Veterans Village of San Diego as part of the ABA Midyear Meeting. Photo by Earnie Grafton.