Hundreds of Immigrants Lose Visas Amid Allegations Against Their Lawyer 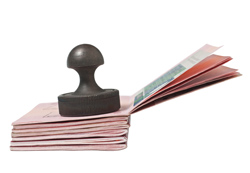 Hundreds of illegal immigrants who consulted a Boston lawyer in 2001 about a temporary reprieve allowing them to seek work visas in hopes of obtaining legal residency are now facing possible deportation.

The reason for the immigrants’ plight: The lawyer, John Dvorak, has been accused of providing inaccurate information in some immigrant cases, the Boston Globe reports. Even immigrants who provided accurate applications say they are being targeted because they hired Dvorak. Some have filed suit.

Dvorak’s law license was suspended for 18 months last week after a March decision by the Board of Immigration Appeals temporarily suspended Dvorak from practicing in immigration courts. The board said Dvorak failed to provide competent representation and his petitions in 14 cases “did not contain accurate information and documentation.”

Federal immigration officials won’t say how many immigrants are affected, but one federal judge said hundreds had received letters notifying them their visas were being revoked.

Previous:
Would Ruling in Citizens United Have Rescued John Edwards from a Criminal Trial?