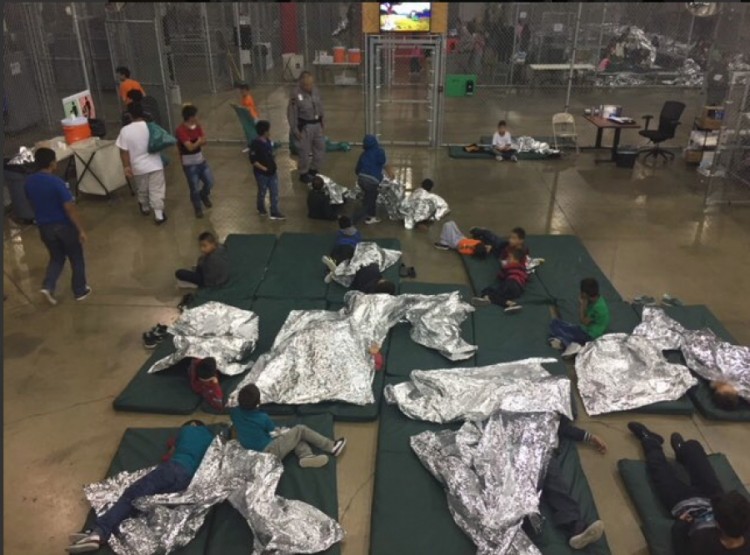 A detention facility in McAllen, Texas./US Customs and Border Protection via Wikimedia Commons.

Two reports from the U.S. Department of Homeland Security’s Office of the Inspector General released this week were highly critical of how the agency handled child and adult immigrants in custody in Texas and California.

One report report faulted DHS for poor planning and communication, violation of the law and indifference to the feelings of separated families, the Washington Post reports. The New York Times also has coverage.

In reviewing the agency’s behavior in June during unannounced visits in Texas, the IG’s report found that at least 860 minors were left in U.S. Customs and Border Protection holding cells for longer than the 72-hour maximum required by law. The holding areas are not the detention centers where immigrants are placed to await trial; they’re chain-link cells intended as temporary holding pens. They lack beds, showers and adequate food, and they’re air-conditioned to such low temperatures that Spanish-speaking immigrants call them hieleras, or “iceboxes.”

One minor was held in one of those cells for 12 days; another for 25, the report says.

Another problem, according to the report, was DHS’s inability to coordinate with the U.S. Department of Health and Human Services, the agency that by law takes custody of immigrant minors. The two agencies’ databases were not compatible, the report said, which sometimes forced officials to email each other children’s files as attachments. Regarding children too young to speak, CBP officers did not fingerprint the children, take photos or keep any other record of who they were and which adults they were separated from. Pre-verbal children also were not given wristbands or any other means of identification, the report says.

All of this set the agencies up for failure when it came time to reunite the families, the report says.

The report also found no evidence that DHS had set up a database after the fact, despite its public claims that it did. Three days after President Donald Trump—responding to a public outcry—issued an executive order putting an end to his administration’s family separation policy, DHS announced that it had set up a central database with HHS that could be used to reunite families. The OIG found no such database, and DHS later acknowledged that there’s no direct interface between the two agencies’ systems.

Inspectors continue to doubt that DHS’s information on the scope of the separations is reliable or accurate, the Post says. More than 100 minors who were taken by the government remain separated from their parents, it says, more than three months after U.S. District Judge Dana Sabraw ordered them reunified.

A surprise inspection of the facility—run by the GEO Group, a private prison company—in May found significant health and safety risks. Most disturbingly, it found that guards were ignoring nooses made of bedsheets hanging in 15 of 20 cells inspected, despite one person dying by suicide and a series of suicide attempts by hanging in the past year. A person being held told inspectors that guards make fun of detainees who don’t die after a suicide attempt.

According to an article published by the Southern California News Group, Adelanto warden James Janecka instructed the staff at Adelanto to “remove any improvised curtains and that any clotheslines, blankets or towels that block sleeping areas are prohibited.”

The inspectors also found major problems with health care. Detainees told the inspectors they waited many months to see a doctor or dentist, resulting in avoidable medical procedures. In some cases, their appointments were canceled without explanation.

The report said one dentist at the facility told inspectors he didn’t have time to do routine cleanings or fillings, and said detainees didn’t need fillings if they brushed and flossed properly. Because dental floss is available only to those who are able to buy it at the canteen, the dentist said detainees should use a string from their socks to floss. No detainees have received fillings in the past four years.

Nathalie Asher, executive associate director of ICE’s Enforcement and Removal Operations, told USA Today that she was “concerned” about the findings, adding that the treatment of detainees is “paramount.” She said the Adelanto facility will undergo a more thorough inspection starting next Wednesday.