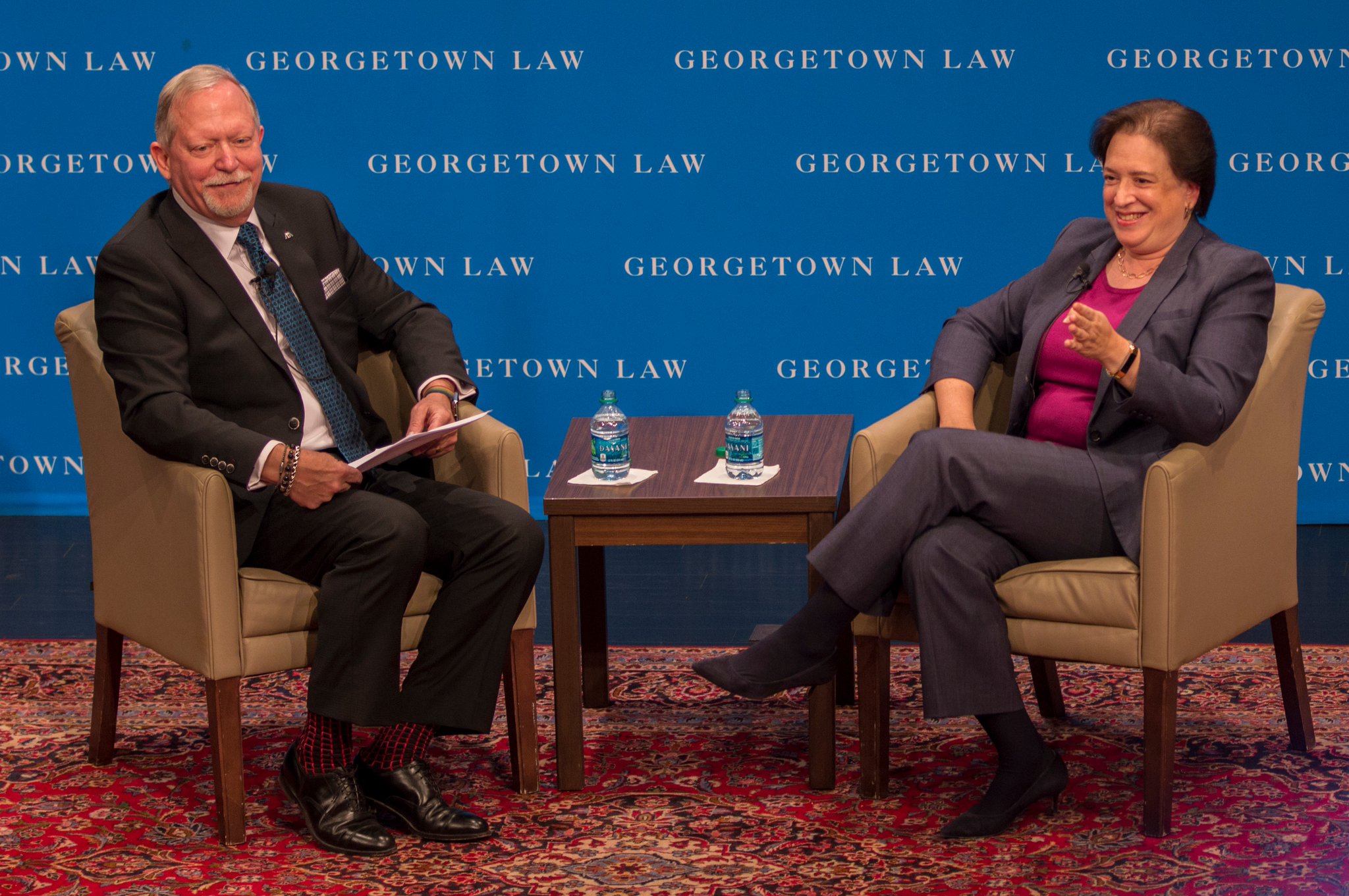 U.S. Supreme Court Justice Elena Kagan talked about the issue of a politicized court in a Q&A session with ABA President Bob Carlson at Georgetown Law on Wednesday.

Kagan said any belief that the U.S. Supreme Court has become too politicized “has to be a concern.”

It would be “a very dangerous thing,” she said, if the court was viewed as just an extension of the political process, particularly today when there are such deep divisions in politics.

She also addressed the need for lawyers to give something back through pro bono and said there are several ways lawyers can contribute.

Kagan is the honorary chair of the 2018 National Celebration of Pro Bono sponsored by the ABA Standing Committee on Pro Bono & Public Service, taking place this week.

As she talked about divisions in society, Kagan mentioned a proposal that would limit Supreme Court justices to 18-year terms.

Kagan said she is a fan of life tenure for Supreme Court justices, but longer set terms could serve the same purpose of insulating the justices from outside pressures. Proposals for terms rather than life tenure, she said, are trying to “take some of the high stakes out of the confirmation process” and if it worked, that could be a good thing.

But Kagan said she doesn’t have an answer on the issue. “Thankfully, that one is not our call,” she said.

Kagan said the Supreme Court has a legitimacy and credibility, so that people follow its decisions even if there is significant disagreement. “That’s one of the glories of our country, and it’s something that is a very precious thing that the court has to be very careful to protect,” she said.

Kagan said the court decides about half of its cases unanimously, and in another 30 to 35 percent of the cases the vote is lopsided or scrambled in ways that people wouldn’t predict.

Still, she said, there are 10 to 15 cases per year where the Supreme Court is closely divided and not so scrambled. People say, “There’s the supreme court again, doing it’s 5-4 thing,” Kagan said.

Kagan said the 5-4 rulings stem from differing philosophies on interpreting the Constitution and statutes that do lead to predictable outcomes. “It’s not partisan,” she said, but you can see how people would say, “This is just politics by another name.”

To fight that misconception, Kagan said, she believes the Supreme Court should “avoid conflicts where it’s not necessary to have one.” One way, she said, is to take big cases and make them smaller by figuring out areas of consensus.

It’s important for society as well as the court to find ways to collaborate and agree on common ground, she said. “I think we could in this country be doing a better job on that,” Kagan said.

Carlson noted that Kagan is the only member of the Supreme Court without judicial experience and asked what experience she draws on as a justice.

Being a law professor helps her think about ways to convey information in understandable ways, she said.

Kagan referred to the variety of work options and volunteer opportunities for lawyers when she talked about the importance of pro bono.

Kagan said she met a lot of different people as the dean of Harvard Law School who followed a variety of career paths. Some people give their whole lives to public interest or government work. “But the numbers of those people are actually dwarfed by people who create different types of careers, who go in and out” of different types of organizations, she said.

“The worst thing for students to think when they were in law school was that you had to kind of make an on-off choice in the beginning” between the private sector and public interest work, she said.

The challenge, she said, wasn’t making sure that people met the requirement. Rather, the challenge was finding the right opportunities for students.

Some students found the opportunities on their own, she noted. And some far exceeded the requirement.

The law school would recognize students who had done the most pro bono work. Some put in so many hours, she said, that she wondered how they found time to go to class.

The National Law Journal also has coverage of Kagan’s appearance.