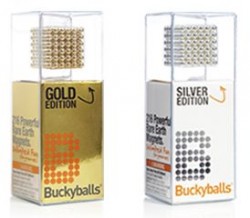 The maker of Buckyballs and Buckycubes is firing back after the Consumer Product Safety Commission filed an unusual administrative complaint last Wednesday seeking to stop sales of the small magnets.

The CPSC claims the product poses a swallowing hazard to younger children, report the Washington Post and USA Today. In at least 12 cases, surgery was required. The agency has taken such a tactic just one other time in the last decade—in an action against BB gun manufacturer Daisy Manufacturing. The case settled with a promise of better safety warnings and a new educational campaign.

Buckyballs and Buckycubes are the only product made by Maxfield & Oberton Holdings, which has marketed the items as desk toys for adults. The small magnets are packaged in groups ranging from 10 to 216. “Thank you for trying to drive a $50 million New York-based consumer product company out of business,” Maxfield & Oberton said in a statement. The company said the agency didn’t give it a chance to make its case before filing the suit, and pressured retailers to stop selling the magnets.

The administrative complaint (PDF) says swallowed magnets can perforate the intestines or can pinch the intestinal walls when two or more pull together. The result could be serious injury and possibly death, according to the CPSC.