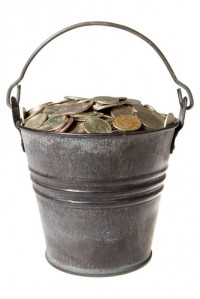 A California insurance agency had to use a van to pay a settlement to an elderly plaintiff who contended he was assaulted by one of the company’s insurance agents.

Lawyer Antonio Gallo says there are more than 16 buckets of coins with an estimated value of $21,000. A bank is counting the amount. The insurer also made partial payment with a check, according to the AP story.

Gallo’s client, Andres Carrasco, had a recent hernia operation. “It’s too heavy,” Carrasco said of the coins. His age has been reported as 76 in some of the stories and 73 in others.

Carrasco’s suit claimed an agent physically assaulted him while removing him from his office when Carrasco was arguing over the cancellation of his insurance, according to the Associated Press.

Gallo told AP he initially refused the coin payment, but eight people delivered the coins the next day when Gallo was in court.

Updated at 2:57 p.m. to clarify that Adriana’s Insurance is an insurance agency.