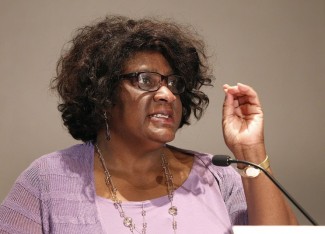 Testimony at Friday’s hearing of the ABA National Task Force on Stand Your Ground Laws made it clear that there’s a new intensity in the wake of last month’s acquittal of George Zimmerman, the neighborhood watch volunteer in Sanford, Fla., who had been charged with murder after shooting Trayvon Martin, an unarmed black teenager in February 2012. Zimmerman claimed he shot Martin in self-defense.

The Zimmerman verdict, announced on July 13 by a jury of six women, ignited protests around the United States, especially in black communities, and fanned the flames of a growing debate over stand-your-ground laws, which have been adopted in about 30 states, starting with Florida. The laws essentially reverse the traditional legal standard in the United States that says persons have a duty to retreat in the face of a threat of force by another person. Stand-your-ground laws say a person has a right to use force in self-defense rather than retreat from threats.

A dozen witnesses who testified before the ABA task force said the Zimmerman verdict helps to illustrate the racial overtones of the debate over stand-your-ground laws. “I’m not an expert in this, but I am an expert in being black,” said Eva Paterson, president of the Equal Justice Society and co-chair of the California Civil Rights Coalition. “All of us were riveted on the Trayvon Martin case,” she said, “and there was widespread dismay over the verdict. We felt the Zimmerman verdict created a license to kill young black men.”

The unequal application of the law to various racial groups “really is the 500-pound gorilla in the room,” said George Gascón, who is district attorney for the city and county of San Francisco.

The hearing was held during the ABA’s 2013 Annual Meeting in San Francisco. It is the fourth and final regional hearing scheduled by the task force, which is scheduled to submit a report and recommendations to the association’s policy-making House of Delegates for consideration at the 2014 Annual Meeting in Boston.

Some speakers found other alleged villains to blame for the proliferation of stand-your-ground laws. “We need sensible gun safety legislation,” said David Muhammad, CEO of Solutions, Inc., a consulting firm in California that provides technical assistance to private foundations and government entities on juvenile and criminal justice issues. Stand-your-ground laws, he said, reflect an effort to sell more guns in the United States. “It’s simply concerns about policy and profits of the gun lobby,” he said.

But other speakers emphasized that concerns about stand-your-ground laws should not be confined to any one community. “The civil rights of all people are compromised by these laws,” said Patricia Rosier, the general counsel for American General Securities and the current president of the National Bar Association, the largest organization for lawyers of color in the United States. “Black people have been singled out by these laws,” she said, “but we’re just the first ones.”