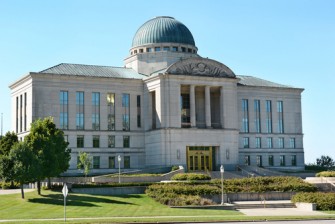 Sentencing a juvenile to life in prison without parole violates the Iowa Constitution, the Iowa Supreme Court ruled Friday.

The court said such sentences amount to cruel and unusual punishment, report the New York Times, the Washington Post and the Des Moines Register.

The Iowa Supreme Court ruled in the case of Isaiah Sweet, who killed his grandparents when he was 17.

“We conclude that sentencing courts should not be required to make speculative up-front decisions on juvenile offenders’ prospects
for rehabilitation because they lack adequate predictive information supporting such a decision,” the Iowa Supreme Court said. “The parole board will be better able to discern whether the offender is irreparably corrupt after time has passed, after opportunities for maturation and rehabilitation have been provided, and after a record of success or failure in the rehabilitative process is available.”

Iowa and Massachusetts are the only two states to ban juvenile sentences of life without parole as a result of court rulings, the Des Moines Register says, citing information from the Sentencing Project. Seventeen other states also ban such sentences, the story says. The New York Times, however, says 16 states ban life without parole for juveniles.