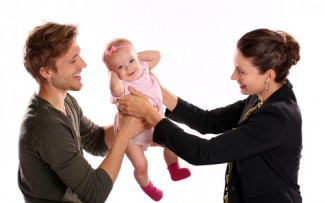 Lawyer Rebecca Geller left her BigLaw firm and struck out on her own in 2011 with the hope that she could spend part of her daytime hours with her children without harming her legal career.

At her old firm, Geller tells the New York Times, “I saw no role models who didn’t have a husband as a stay-at-home dad.”

Her new firm, the Geller Law Group in Fairfax, Virginia, is a “small-scale experiment in parenting while employed,” according to the Times article, written by Noam Scheiber. “And like all experiments, the reality has been messier than the theory.”

The article notes that, in 2013, only 16.5 percent of law partners were women, though the number of men and women graduating from law school is about the same. Women lawyers cite the difficulties of combining law practice with caring for children as the most important reason for dropping off the partnership track, according to a 2007 study by the MIT Workplace Center.

Similar complaints surfaced at Mayer Brown, says Scheiber, who wrote a 2013 case study of the law firm. “One former Mayer Brown associate told me that when the firm’s female partners held seminars on achieving work-life balance, the advice was frequently ‘Outsource your life,’ which, they explained, meant finding a spouse willing to stay at home with children, or hiring a nanny, cook and housekeeper,’ ” Scheiber wrote in the Times article.

The Times article followed Geller partner Maria Simon and found that juggling work and home is still difficult, even in a family friendly law firm. Though Simon has flexibility to leave work for her son, she still works more than 60 hours a week. A client who is late to a meeting can disrupt the schedule. She makes about half the $250,000 to $300,000 she estimates she would make at a large law firm. And, if she becomes pregnant again, maternity leave isn’t as generous as at the big firms.

“It’s one of the conundrums of the work-life conflict,” the Times says. “Large firms have the resources to accommodate lawyers’ family obligations. They just aren’t very hospitable in practice.”