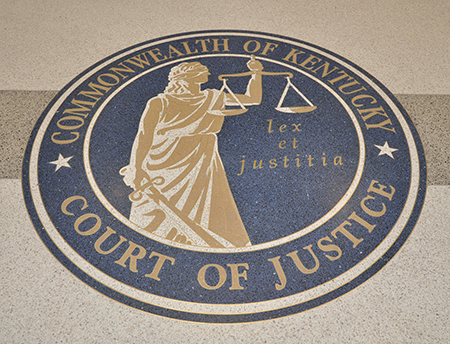 A Kentucky judge is denying salacious allegations in an ethics complaint that accuses her of hiring a former church pastor because of their sexual relationship, then engaging in sexual relations with the new employee and her secretary in a courthouse office.

The Nov. 18 complaint claims that the judge, Dawn Gentry of Kenton County, forced another employee to resign to create a job opening as a case specialist for the former pastor, who played guitar in a band with Gentry called South of Cincy, the Cincinnati Enquirer reports.

The complaint alleges that Gentry not only had sex with the ex-pastor and secretary in a courthouse office, she also left the courthouse with them during regular court hours, leaving the office without coverage. Gentry also “improperly delegated judicial functions” to the former pastor, according to the complaint. She also allowed him to play his guitar at the courthouse, causing a distraction for employees, according to the complaint.

The Kentucky Judicial Conduct Commission didn’t publicly release the complaint until last week, after the Cincinnati Enquirer wrote a story about the investigation based on sworn statements and interviews it obtained.

The lawyer believed Gentry hoped to blame her husband for their divorce if the lawyer seduced him, according to the Enquirer’s account of the affidavit.

Gentry is also accused of several actions related to her judicial campaign. She is accused of pressuring members of the guardian ad litem panel to donate the maximum amount to the campaign and removing a lawyer from the panel for failing to donate the maximum. She is also accused of using court staff to work on her campaign during work hours and retaliating against lawyers who didn’t support her campaign by delaying hearing dates for their cases.

Another accusation says Gentry at times consumed alcohol at the courthouse and allowed her staff to do the same.

The lawyer who was removed from the GAL panel was replaced by a lawyer who, along with her husband, had donated quadruple the amount of the fired lawyer’s donation to Gentry’s campaign, according to the Enquirer.

Gentry’s Dec. 2 answer to the complaint denies any inappropriate unwanted sexual advances to the lawyer, and denies a sexual relationship with the former pastor and with her secretary inside or outside the courthouse. Nor did she delegate judicial functions to the pastor, she says.

The answer also says Gentry never asked anyone for campaign money, though she did ask members of the GAL panel for help. Nor did she intentionally use staff for campaign work during work hours, she said. She says she didn’t retaliate against the GAL lawyer over campaign donations; instead his performance had been subpar. And she didn’t delay hearing dates, which are set by her secretary, Gentry said.

She relied on her staff to keep accurate time sheets and she allowed flexible work hours. Though she did sometimes go out to lunch with the secretary, her case specialist and a staff attorney, she has changed the procedure so the office is always staffed, she said.

She did allow guitar playing, but didn’t realize it was distracting employees, she said. And she didn’t know that employees were consuming alcohol at work, she said.

Gentry remains in her job, paying $136,900 a year, but some lawmakers are considering impeachment, the Cincinnati Enquirer reports.