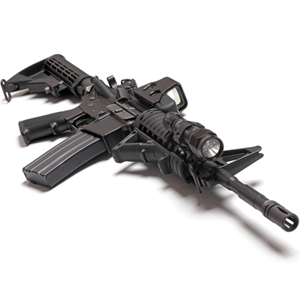 The chief judge of Colorado’s 5th Judicial District has been charged with felony menacing in an incident allegedly involving an "AR-15 style rifle."

Judge Mark Thompson, 54, was removed as chief judge after he was charged on Saturday in connection with a July 25 incident, report the Denver Post, Law.com, the Colorado Sun and Colorado Politics.

The complaint alleged that Thompson put a person in “fear of imminent serious bodily injury by use of a deadly weapon … namely: an AR-15 style rifle.”

The Denver Post and the Summit Daily have coverage of the complaint, which was released Wednesday.

Thompson can continue working as judge, but not as chief judge, when he returns from planned time off. His district covers Clear Creek, Eagle, Lake and Summit counties.

Details of the incident were at first suppressed following a prosecution request that cited the possibility of harming the investigation and causing “irreversible harm” to Thompson’s reputation.

The prosecution said Thompson was “a prominent member of the Summit County community.”

The victim’s name was redacted in the complaint released Wednesday, and there was no information on how the incident played out.

There was no affidavit of probable cause supplying case details because Thompson was not arrested. Instead, he was issued a summons to appear in court on Dec. 17, a spokesperson for the Colorado Judicial Department told the Summit Daily.

Judge Paul Dunkelman was appointed to replace Thompson as chief judge on an interim basis. Thompson’s case will be heard by a judge in the 17th Judicial District, but Dunkelman signed a one-line order initially keeping secret court documents in the case, according to the Denver Post.

Judges in Colorado are required to explain in written orders why they are limiting public access to a case, but Dunkelman didn’t do that when he granted a prosecution request for secrecy, according to the Denver Post.

She said prosecutors wanted to give the special prosecutors who will oversee the case a chance to handle it as they choose.

“There’s nothing in that intended to be secret or nefarious or hiding anything,” McCollum told the Denver Post. “We just wanted to give a chance to the district that did get it, that they would be able to get it clean and handle in whatever way they thought appropriate to be able to respond to the press.”