A judge on a United Nations criminal court says he quit after concluding that the diplomatic world sees no value in an independent judiciary.

Christoph Flugge said he resigned after alleged political interference by Turkey and the United States, report the Guardian, the South China Morning Post and the Independent.

Flugge explained his reasoning in an interview with the German newspaper Die Zeit. Flugge had been a judge on the International Criminal Tribunal for the Former Yugoslavia.

Flugge said Turkey had made baseless allegations about a Turkish judge, and the United Nations secretary general did not extend his tenure. The Turkish judge, who was a member of the International Residual Mechanism for Criminal Tribunal, had been arrested and convicted for alleged ties to a U.S. cleric blamed for a failed coup attempt in Turkey.

Flugge also complained about a speech in September in which U.S. National Security Adviser John Bolton said the United States “will not sit quietly” if the International Criminal Court comes after the United States or its allies. 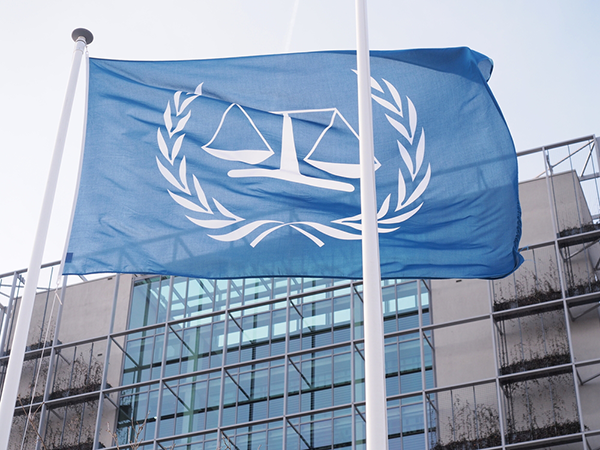 The flag of the International Criminal Court flies outside the ICC building in the Hague, Netherlands. Image from Shutterstock.com

Bolton said the ICC should not investigate unfounded allegations of detainee abuse by U.S. patriots protecting the United States in Afghanistan.

Bolton said the United States could respond by banning ICC judges from traveling here, by sanctioning their funds in the U.S. financial system, and by prosecuting them in the U.S. criminal system. Bolton criticized unchecked powers of the U.N. tribunal and said there are no adequate mechanisms to hold it accountable.

Flugge said judges on the U.N. court had been stunned by the remarks. “The American threats against international judges clearly show the new political climate,” he said. “It is shocking.”