A judge in Onondaga County, New York, has resigned after he was accused of unwanted kissing of two female staffers.

Michael Hanuszczak, 64, resigned on Sept. 21 and agreed never again to seek judicial office, according to a press release by the New York State Commission on Judicial Conduct. A decision accepting the stipulation is here and the formal written ethics complaint against him is here. Syracuse.com has coverage.

Hanuszczak kissed both staff members on the cheek, sometimes while giving them orchids, the complaint alleges. One staff member testified the kisses landed on her cheek because she turned her head.

Hanuszczak allegedly kissed one court staffer and gave her an orchid in January 2017 when she was transferred out of his court. Hanuszczak invited the woman to his chambers, placed his hand on her shoulders, and kissed her on the check twice without her consent, according to the ethics complaint.

The staff member testified that she turned her head both times when Hanuszczak leaned in to kiss her so that the kiss landed on her cheek right next to her lip.

He allegedly told the woman words to the effect that, “No one knows me like you do, not even my wife. You anticipate my every need.”

The staffer reported the incident to another staff member and to her supervisor. 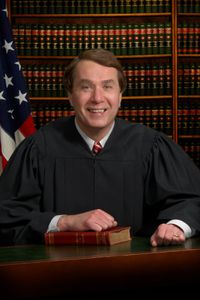 The staff member’s testimony “was coherent, corroborated and detailed, and is credited in all respects when weighed against [Hanuszczak’s] suggestion of bias or oversensitivity,” a referee said in a report making proposed findings of fact.

Hanuszczak had also discussed his dating life with the staff member, twice asked her to meet him at a restaurant to discuss his campaign for a surrogate judgeships, and once asked her if she knew “how to do a three-way” when she was setting up equipment for a teleconference call, the complaint says.

Hanuszczak is accused of kissing the second staff member on the cheek on two different occasions. Once, in 2011, he called her into his office to thank her for a referral that helped him on a family health matter, then kissed her.

A second time, in 2016, Hanuszczak learned the staff member’s father was ill with cancer. He presented the woman with an orchid, leaned in toward her and kissed her on the cheek without her consent, the complaint says. A referee said there had been three kisses, and quoted the staff member.

“I felt that it was weird,” the staff member said. “I guess if it was just one kiss on the cheek, I would feel less weird, but because it was three, I thought that was over the top, and I guess I was a little concerned that he thought it was more than just expressing his concern.”

One time when he overheard the second staffer telling his secretary she was engaged to be married. Hanuszczak allegedly called the staffer to his office. He told the staff member that, had she known she was not married, he would have been interested in dating her, the complaint says.

A second time he told the second staff member he remained interested in dating her if she was also interested, while cautioning that any relationship would need to be discreet, according to the complaint.

Hanuszczak was a family court judge and an acting judge on the trial-level supreme court. His lawyer, Robert Julian, gave a statement to Syracuse.com.

“Judge Hanuszczak had a nearly 20-year career on the bench in which nearly 50 of decisions were published,” Julian said. “He presided with success over two specialty courts and he has worked vigorously to achieve justice as a jurist. He regrets the mistakes that he has made and his resignation/retirement is offered in that spirit.”

Hanuszczak’s resignation is considered a retirement that will allow him to collect a pension, according to Syracuse.com. His judgeship had been set to end at the end of the year.