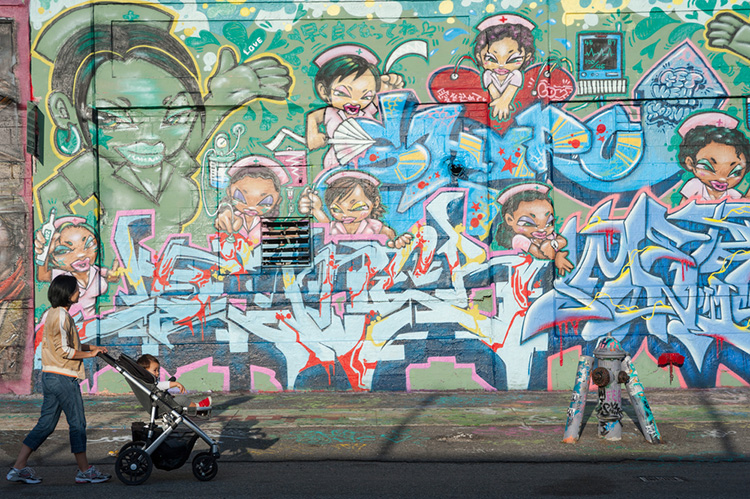 A woman and child walk by graffiti at the now-gone 5Pointz graffiti mecca in Queens. gabriel12 / Shutterstock.com

A federal judge in Brooklyn, New York, awarded statutory damages of $6.7 million to 21 graffiti artists in a suit that contended a building owner violated federal law when he painted over their artwork.

U.S. District Judge Frederic Block ruled Monday that 45 works of graffiti art on the 5Pointz warehouses in the borough of Queens were protected under the Visual Artists Rights Act because of their “recognized stature,” report the Washington Post and the New York Times.

Dean Nicyper, a Withers Bergman partner who specializes in art law, told the New York Times that the decision is the first to find that graffiti and graffiti artists were protected by VARA.

The Visual Artists Rights Act amends copyright law to give artists the right to attribution and integrity of their visual work. VARA says the right to integrity includes a right “to prevent any destruction of a work of recognized stature, and any intentional or grossly negligent destruction of that work is a violation of that right.” The law also allows damages for distortion or mutilation of art work to the prejudice of the artist’s honor or reputation.

One exception provides that unremovable works of art incorporated on a building are not protected if the artist waives his or her rights in writing signed both by the artist and the building owner. In this case, there was no signed writing, Block said.

When works of art are removable, the artists are entitled to 90 days’ notice. Block did not provide such notice, though some art work was on doors, windows, plywood and siding, which could have easily been removed. Other art works could have been preserved by contractors and a conservator.

Statutory damages are capped at $150,000 for each art work for a willful violation of the law, though plaintiffs had the option of seeking actual damages instead.

The suit against the owner of the buildings, Gerald Wolkoff, had sought to stop him from tearing down the warehouses to build high-rise luxury condos. The artists had been allowed to paint the murals in a curated system overseen by a building tenant and artist, Jonathan Cohen. Short-term walls were for beginner artists and their work would be painted over from time to time, while long-term wall space was awarded based on competition among artists. Cohen had final say over the duration of all the art work.

Though Wolkoff didn’t sell the art, he indirectly profited when the value of his site increased from $40 million to $200 million, Block said. He also made hundreds of thousands of dollars by charging licensing fees to film at the site.

Pictures of the art work before its destruction are in an appendix that begins on page 52 of Block’s opinion.

In November 2013, the judge denied a request for a preliminary injunction and promised to issue an opinion eight days later. “Rather than wait for the court’s opinion,” Block said, “Wolkoff destroyed almost all of the plaintiffs’ paintings by whitewashing them during that eight-day interim.”

The case went before a jury, but the 21 artists waived their jury rights just before the summations. Block allowed jurors to rule in an advisory capacity. Jurors found the plaintiffs were entitled to damages for 36 out of 49 works of art and that Wolkoff acted willfully. Block went further and found liability for a total of 45 paintings.

Block said Wolkoff, has been “singularly unrepentant.” His “precipitous conduct . . . was an act of pure pique and revenge for the nerve of the plaintiffs to sue to attempt to prevent the destruction of their art,” Block said. “This was the epitome of willfulness.”

Wolkoff had testified the graffiti artists knew that the buildings showcasing their art would one day be torn down. Block said he believes Wolkoff “in the main testified truthfully,” but he was a difficult witness. “He was argumentative and prone to tangents and non-responsive answers,” Block said. “Eliciting coherent testimony was a chore and was only achieved after the court threatened to hold him in contempt.”

“Wolkoff’s recalcitrant behavior was consistent with the manner by which he testified in court,” Block said. “He was bent on doing it his way, and just as he ignored the artists’ rights he also ignored the many efforts the court painstakingly made to try to have him responsively answer the questions posed to him.”