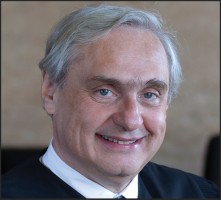 Judge Alex Kozinski of the San Francisco-based 9th U.S. Circuit Court of Appeals announced Monday that he will retire immediately after more women accused him of sexual misconduct.

Kozinski said his friends and family urged him to remain as a judge as he defended himself, but he decided he “cannot be an effective judge and simultaneously fight this battle,” the Washington Post reported.

“I’ve always had a broad sense of humor and a candid way of speaking to both male and female law clerks alike,” Kozinski said. “In doing so, I may not have been mindful enough of the special challenges and pressures that women face in the workplace. It grieves me to learn that I caused any of my clerks to feel uncomfortable; this was never my intent. For this I sincerely apologize.”

Two former clerks said Kozinski asked them to look at pornography in his chambers. A U.S. Court of Federal Claims judge said Kozinski grabbed her breasts when they were driving back from an event in the mid-1980s after she said she did not want to stop at a motel for sex. Another lawyer said Kozinski kissed her on the lips at a legal community event around 2008. A law professor said Kozinski pinched her at a dinner. And a law student said Kozinski moved his finger along her clothed breast during a reception as he claimed he was trying to see her name tag.

The 9th Circuit’s chief judge, Sidney Thomas, had initiated a complaint against Kozinski based on the initial Post story. Chief Justice John G. Roberts Jr. referred the complaint to the New York-based 2nd U.S. Circuit Court of Appeals for review and disposition.

Kozinski hired Quinn Emanuel Urquhart & Sullivan to represent him, the National Law Journal (sub. req.) reports. He is represented by Susan Estrich and William Burck, who are co-chairs of the law firm’s crisis law practice. Burck is a former Kozinski clerk.

Here is the full statement by Kozinski released by the 9th Circuit: “It has been an unparalleled honor to serve as a federal judge for more than 35 years. I firmly believe that a strong judiciary, free from political pressures, is vital to the preservation of this great nation. I found in this country, and in my work, opportunities and satisfaction that I never thought imaginable when I arrived here, at the age of 12, a refugee from Communism. I am grateful to my colleagues with whom I have had the privilege of serving, and to the countless hard-working lawyers who have appeared before me. I have learned so much from them all and will be forever grateful for their professionalism, intellectual rigor, and in many instances their steadfast friendship.

“It has also been my privilege to help train the best and the brightest of several generations of new attorneys. I was made better by working with them. My clerks went on to stellar careers in law, business and academics. Their success has made me proud and I am gratified by the outpouring of support I have received privately from so many of them.

“Still, I’ve always had a broad sense of humor and a candid way of speaking to both male and female law clerks alike. In doing so, I may not have been mindful enough of the special challenges and pressures that women face in the workplace. It grieves me to learn that I caused any of my clerks to feel uncomfortable; this was never my intent.

“For this I sincerely apologize.

“A couple of years ago, as I reached the age when several of my colleagues had decided to take senior status or retire, I began considering whether the time had come for me to move on as well. Family and friends have urged me to stay on, at least long enough to defend myself. But I cannot be an effective judge and simultaneously fight this battle. Nor would such a battle be good for my beloved federal judiciary. And so I am making the decision to retire, effective immediately.”

Updated at 9:33 a.m. with Kozinski’s statement.