'I can't keep up with you on this stuff,' busy trial lawyer tells Georgia justices in public defender's libel suit 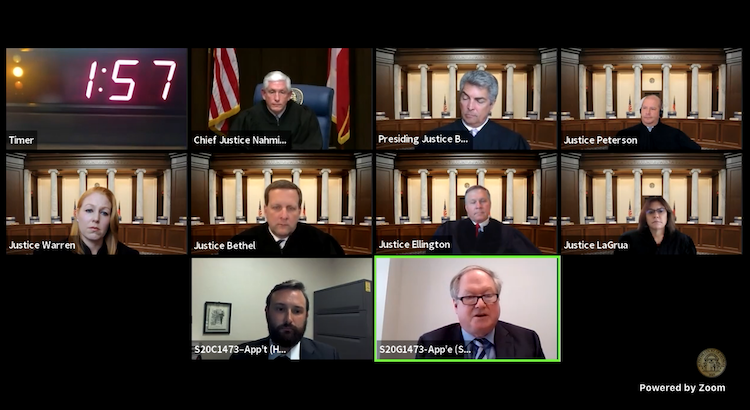 A lawyer representing an assistant public defender in a libel suit on Tuesday struggled with some oral argument questions about whether his client was a public official, finally telling the Georgia Supreme Court that he would hire someone else to “argue appellate stuff” in the future.

Savage represents Glynn County, Georgia, part-time public defender B. Reid Zeh, who sued the ACLU over a blog post that called him “crooked” and accused him of charging an indigent defendant he represented.

Zeh represented only misdemeanor clients as a public defender, while his law practice represented people accused of felonies. His suit says he did nothing wrong when he represented a felony defendant, and the ACLU post was false.

The ACLU had sought dismissal of the case under Georgia’s anti-SLAPP statute, which is intended to protect freedom of speech in matters of public interest. The trial court and an appeals court refused to toss Zeh’s suit.

Public officials must meet a higher actual malice standard to prove libel, and Georgia Supreme Court justices focused on the issue in the arguments.

Savage begins to speak at 17:12 in the video at this page. He began by saying he tried three cases in the last five weeks, he is a “fact lawyer,” and he isn’t prepared to argue “the California stuff.”

“I’d have to go with what the court of appeals said; he’s not a public official,” Savage replied.

“I think it’s important to tell the truth,” Savage added. “I’m doing the best I can.”

Nahmias followed up with questions about other types of lawyers handling cases for the government who are public officials. What about the U.S. attorney for the Northern District of Georgia? What about the head of the federal public defender service?

“I don’t know the answer to that,” Savage replied. “So you can chastise me for not knowing the answer.”

Warren then helpfully summarizes what she thinks Savage is arguing—that the ACLU had a duty to further investigate its claims, and failure to do so amounts to actual malice.

In response to another question, Savage recited a helpful fact in the case and said he feels somewhat vindicated for being able to do so.

“Look, you know, I’m not answering your questions that well. This is the last time. I’m mean I’m not saying to feel sorry for myself. I’m very proud of trying cases for people in the real world. … I got a $66.5 million verdict three weeks ago. … So I’m proud of what I do.

“I can’t keep up with you on this stuff. … I’m proud of myself as a lawyer. So you know, whatever. I don’t have anything to add to it. And my briefs are well written by Miss Pinckney. We won at the trial court. We won at the court of appeals. And we ought to win here.”

Nahmias replied that the briefs were helpful.

Savage told the court that he must go to Vidalia, Georgia, in the afternoon to represent a farmer who has been forced into bankruptcy.

“That’s what I do. So I’m done. … I’m going to get somebody to argue appellate stuff that does better than me,” Savage said.

Savage acknowledged that he struggled with some answers, but they dealt with some “esoteric questions dealing with California cases.”

“Yeah, I struggled with the questions that were dealing with California cases. Yes, I thought the judges were tough in their questioning, but I’m not saying they were unfair,” Savage says.

Asked whether it was a mistake to acknowledge trouble keeping up with the questions, Savage replied, “Maybe.” Asked whether he will hire another lawyer in the future for oral arguments, Savage says he isn’t sure. “On civil rights things, I think I would, yes,” he adds.

“What people need to understand, with three verdicts over $60 million, I’m an OK lawyer,” Savage says.

He pointed out that he won in Zeh’s case at the trial and appellate level.

“You just got to understand,” he says. “I’m in Savannah, Georgia. I’m not in BigLaw, and I’m proud of what I’ve accomplished. We are not civil rights, constitutional law experts. We got ready to represent our client, and I’m proud of representing him.”

In a follow-up email to the ABA Journal, Savage says the court “acknowledged during oral argument that the case was well briefed by both my law firm and the ACLU.”

In the phone interview, Savage says Zeh is a misdemeanor public defender, and he can charge a fee in courts where he is not the public defender. The ACLU had criticized Savage for accepting fees to represent a felony client charged seven times with shoplifting.

The client didn’t seek a public defender and may have been ineligible because of evidence he worked for a Mercedes dealership, Savage says.

“We had no discovery in the case. None,” Savage says. “The ACLU took the position that my client was not a public figure, and therefore we could get no discovery at all. … My bottom line is you should not be able to say things about people in advertisements and blogs that are false. That’s just wrong.”