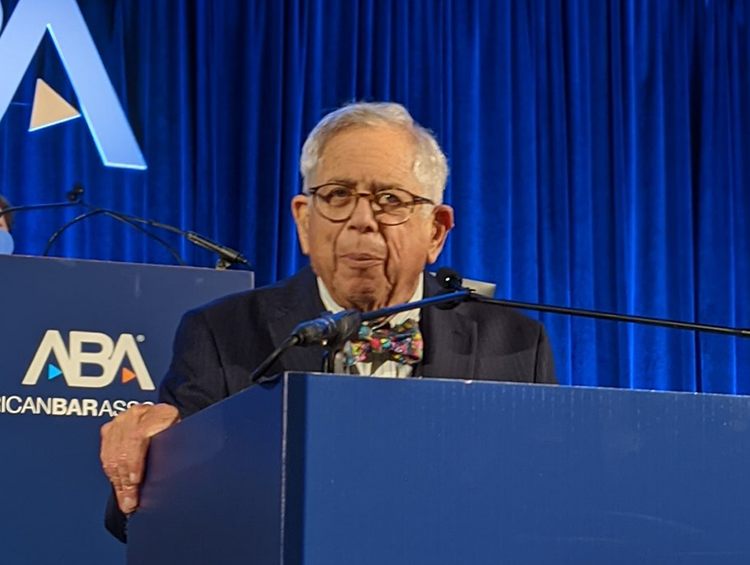 ABA Medal of Honor recipient Lawrence J. Fox: “I wanted to give the most uplifting speech I could give, but what I am submitting really is a call for serious consideration and revisitation.” Photo from the American Bar Association.

In reflecting on his work, ABA Medal of Honor recipient Lawrence J. Fox showed both humor and pride for the association, as well as a call to recruit more members.

“This is going to be a while,” the 1968 graduate of the University of Pennsylvania’s law school cracked when introduced by outgoing ABA President Patricia Lee Refo. Fox attended the Chicago House of Delegates meeting in person Monday, and he received a standing ovation at the beginning and end of his speech.

Fox is the son of a lawyer who sometimes accompanied his father to work on Saturdays. In his speech he recalled watching his late brother Jon Fox, a lawyer and Republican U.S. representative from Pennsylvania, rally enough party members to block cuts to the Legal Services Corp. in 1997.

“For those of us who remember back to the old days,” he told ABA members, “we saved Legal Services, and in large part, it was due to Jon’s work.”

Today, there are “serious problems,” said Fox, now a visiting lecturer at Yale and a partner with Schoeman Updike Kaufman & Gerber in New York City.

“I wanted to give the most uplifting speech I could give, but what I am submitting really is a call for serious consideration and revisitation. I know how hard everybody works, but there are events of the last six months—and three years—that just made me feel like we have to muster more pressure, or solutions,” Fox said.

He also put out a call to recruit more ABA members.

“There’s no doubt the ABA has a great opportunity today in large part because we’ve been presented involuntarily with some terrible things happening. We should recognize our own obligation, and everyone in this room certainly does that, but we need to recruit more, and we need to recruit quickly,” said Fox, who has held leadership positions with the ABA’s Standing Committee on Ethics and Professional Responsibility, the Litigation Section and the Commission on the Evaluation of the Rules of Professional Conduct.