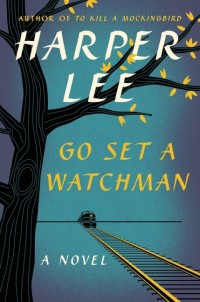 Harper Lee’s estate trustee and lawyer, Tonya Carter, explains how she found the author’s second book in a newspaper commentary that has failed to dispel questions surrounding the discovery.

One person who differs with Carter’s account is Harper Lee’s former literary agent, Samuel Pinkus, who was sued by Lee in 2013, the New York Times reports. The suit against Pinkus, which later settled, had maintained he tricked Lee into transferring to himself the copyright for To Kill a Mockingbird.

Writing in the Wall Street Journal, Carter says she found the manuscript for the second book, Go Set a Watchman, in a bank vault last August after someone mentioned a lost manuscript during a gathering of Lee’s family and close friends. “Curiosity got the best of me and I found a long-lost manuscript written by one of America’s most beloved authors,” Carter writes.

Reviews of Watchman, being released today, say Atticus Finch is portrayed as a racist who supports segregation in the new book, in which Scout returns to her hometown as an adult and discovers her father’s bigoted views. According to previous reports, Lee’s editors rejected Watchman, which referred to the trial portrayed in Mockingbird, and advised her to tell the story of the trial through the eyes of Scout as a child.

In the Wall Street Journal, Carter acknowledges a 2011 visit to the bank vault bank to inventory and appraise Lee’s papers. Also at the meeting were Pinkus and Justin Caldwell, an appraiser from Sotheby’s. Someone noticed the first page of a typed, original manuscript differed from Mockingbird, so Carter was dispatched to get a copy of Mockingbird for comparison purposes. Carter says she returned with the book and then left. She was never told of a second book, Carter says.

Pinkus told the Times that Carter didn’t leave after returning with the Mockingbird book. “According to Mr. Pinkus,” the Times says, “there was no discussion of publishing Watchman in 2011, because Ms. Lee and her sister, Alice, had long maintained that Ms. Lee had no interest in publishing another book.”

The Times also refers to a source who was familiar with Caldwell’s account of the meeting. The anonymous source said Carter stayed at the meeting after she retrieved the Mockingbird book. According to the source, Caldwell explained that the manuscript was different than Mockingbird and could be worth as much as a seven-figure sum.

Alice Lee, a lawyer, died in November before Carter announced she had found the Watchman manuscript. State authorities investigated whether Lee was the victim of elder abuse and found no abuse or neglect.

The Washington Post, meanwhile, says Carter’s account raises another question. “After discovering the Watchman manuscript,” the Post says, Carter “lists the people who read it prior to the decision to publish: herself, agent Andrew Nurnberg in London, ‘a handful of others,’ and HarperCollins, the publishing house.

“She does not list Lee as one of the readers, nor does she report any comment from Lee about the text or its remarkable changes to the moral character of her iconic character.”