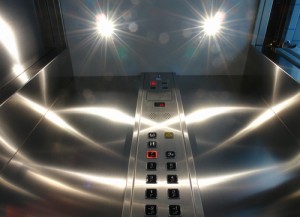 A Philadelphia lawyer who claimed her law firm failed to accommodate her claustrophobia may proceed with her lawsuit, a federal judge has ruled.

According to Schiller’s Feb. 25 opinion (PDF), Serine had requested a transfer in 2012 from a Marshall Dennehey office in Moosic, Pennsylvania, to an office in Philadelphia or Cherry Hill, New Jersey, to be close to family in the area. The firm allowed a transfer to the Philadelphia office.

But Serine says she experienced anxiety and other symptoms of claustrophobia beginning with her elevator ride to the 24th floor of the Philadelphia office on Oct. 1, 2012. She “obsessively researched evacuation plans” and had trouble sleeping and eating, the opinion said. She was extremely nervous at work, particularly when in the elevator or when away from a window.

The law firm allowed Serine to work from home while she sought treatment with a psychologist, but turned down her request to work at the Cherry Hill office or Pennsylvania offices in King of Prussia or Doylestown.

In December 2012, Serine was advised she could work in Philadelphia or Moosic, but she could not continue to work from home. She was fired the next month.

Schiller said Serine had made out a claim under the Americans With Disabilities Act and the Pennsylvania Human Rights Act, but dismissed her claim for intentional infliction of emotional distress.

Joseph Santarone Jr. is representing Marshall Dennehey in the suit. “Judge Schiller, for the purpose of the motion to dismiss, must of course, accept the allegation in the pleading as true,” Santarone told the Legal Intelligencer in a statement. “The facts will come out in discovery and we will be filing a motion for summary judgment at a later date.

“The firm, at Ms. Serine’s request, had moved her to Center City. Prior to that time she was well aware of the office location, had been to the office and never expressed any concern. Marshall Dennehey has been recognized as one of the best places to work in Philadelphia and takes pride in its relationship with all employees.”