Linda Brown, the 'symbolic center' of Brown v. Board of Education, dies 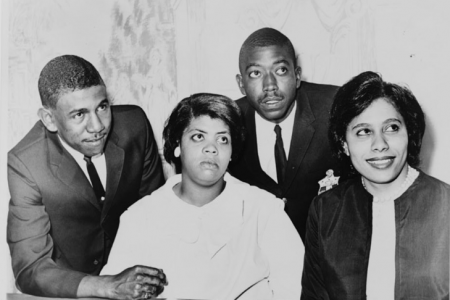 A woman who was central to the landmark Brown v. Board of Education desegregation decision died Sunday.

Linda Brown Thompson was “the symbolic center” of the case, the Washington Post reports. Her father, the Rev. Oliver Brown, was the lead plaintiff in the case. One of the NAACP lawyers arguing on their behalf was Thurgood Marshall.

Brown was 75 when she died, though some sources said she was a year older, the New York Times reports. An obituary provided to the Topeka Capital-Journal by Brown’s family lists her age as 75.

When Linda Brown was in the third grade, she wasn’t allowed to attend the all-white Sumner School in Topeka, Kansas, the school closest to her home. Her father took Linda to Sumner as part of a recruitment effort for a case to challenge segregation and was turned away, according to Linda Brown’s sister, Cheryl Brown Henderson.

Oliver Brown was recruited by the NAACP as part of a strategy to challenge school segregation. The Brown case was consolidated before the U.S. Supreme Court with cases from Washington, D.C., South Carolina, Virginia and Delaware, according to the Brown Foundation website.

Linda Brown had told NPR 19 years after the 1954 decision that she was too young to understand why she couldn’t attend Sumner.

“We lived in a mixed neighborhood but when school time came I would have to take the school bus and go clear across town and the white children I played with would go to this other school,” she said.

Brown was attending an integrated middle school in a different neighborhood by the time the Supreme Court decided Brown v. Board of Education. She never attended Sumner.

Linda Brown Thompson was a Head Start teacher, a program associate at the Brown Foundation, and a public speaker. She was also a plaintiff in a case that successfully sought to reopen the Brown case on the basis that Topeka schools remained racially segregated. Several magnet school opened as a result of the case.