Lock up or toss out the flag-burners? Trump tweet highlights a difference with Scalia 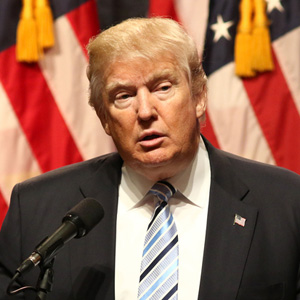 According to Donald Trump, there should be legal consequences for flag burning.

“Nobody should be allowed to burn the American flag—if they do there must be consequences—perhaps loss of citizenship or year in jail!” Trump tweeted on Tuesday.

Several publications covered the tweet and pointed out that Trump’s punishments would apparently be unconstitutional under U.S. Supreme Court precedent. The publications include the Washington Post in stories here and here, Politico, the New York Times and the Wall Street Journal’s Washington Wire blog.

Trump has praised Justice Antonin Scalia, but Trump differs with the late justice on the constitutionality of a ban. Scalia has stated he doesn’t like flag burning and he would lock up flag burners if he were king. But he explained flag burning has First Amendment protection, a view he endorsed in the 5-4 Supreme Court decision Texas v. Johnson, issued in 1989.

Trump’s tweet followed a Fox News story about a flag burning at Hampshire College in Massachusetts. The school decided to remove the flag from its campus flagpole.

Efforts to amend the Constitution to ban flag-burning have failed, as did a 2005 bill that would outlaw flag-burning if it was intended to incite a violent response rather than make a political statement. A co-sponsor of the bill was then U.S. Sen. Hillary Clinton, who nonetheless did not support the constitutional amendment.

Nobody should be allowed to burn the American flag - if they do, there must be consequences - perhaps loss of citizenship or year in jail!