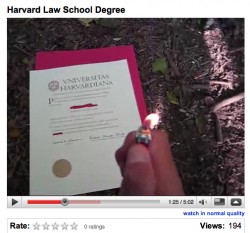 Ever want to ditch the rat race? Burn your diploma and take a vow of simplicity?

If you thought about it, but could never quite muster the courage to strike a match, you can live vicariously through “Jack,” a Washington, D.C., a 30-something lawyer who announced on his blog in June that he is giving up his $300,000-plus annual salary and opting for a simpler life.

In Adventures in Voluntary Simplicity, Jack blogs about his excesses and exit strategies. Then on Oct. 27, he took a key symbolic step in that direction. He burned his Harvard law diploma and posted a video on YouTube for all the world to bear witness.

“I’ve been thinking about doing this, in one way or another, for a while now. But I was never really sure if I would be doing it for the right reasons. Not to mention how silly it sounded whenever I brought it up to people. But this weekend it all came together: the weather was beautiful, the trails were inviting and freedom seemed just around the corner. So I went for it,” Jack writes.

“This is NOT a knock against Harvard. Or a calculated criticism of legal education. Or even a rejection of elitism, per se. Sometimes you just need to say goodbye to your past in order to move forward.”

In the end, he concludes, “it was just a piece of paper.”