The Magna Carta is one of Britain's best exports, Cherie Blair says 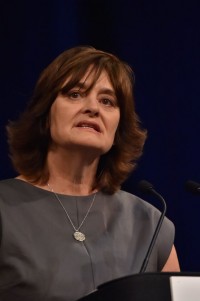 Cherie Blair marked the 800th anniversary of the sealing of the Magna Carta by proclaiming it to be one of Britain’s best exports.

“The Magna Carta is one of Britain’s gifts to the world,” she said. “Although only three of its clauses remain on our statutes, it is still a testament to the importance of the rule of law around the world.”

“After 35 years, you might find it strange that I started a new business enterprise,” she said. “But as you may know as someone who lived at 10 Downing Street for 10 years and still managed to carry on my legal practice, I like to do things that are not expected.”

Blair pointed out that businesses also rely upon the rule of law, which began in England with the Magna Carta, because it allows them to operate with certainty and predictability in countries that honor it.

While the rule of law is firmly fixed in the United Kingdom and the United States, Blair has learned not to take it for granted. She recounted the story of a client in Africa who was arrested on trumped-up charges after a falling out with those in power.

“We managed to get our client out [of jail], but it does show how in areas where the rule of law isn’t as fixed as it is in our countries, you really have to be quite adept and be able to negotiate the realities on the ground,” Blair said. “In the long run, of course, these things will change. But in the short run, we need to be sensitive as to how we can navigate around that.”

During the question-and-answer session, Blair was asked for her views on the outcome of the general election in the U.K. in May, when the Conservative Party won another five years as the majority government.

“I passionately believe the British people don’t want extremes of any kind. They don’t want an extreme left and neither do they want an extreme right,” she said. “If you’re wanting to encourage change and progress in this country, you have to do it from the center ground.”

Blair spoke at lunch on Friday at the Grosvenor House hotel as part of the ABA London Sessions, which are being held to commemorate the 800th anniversary of the sealing of the Magna Carta. The sessions finish Monday with a rededication of the ABA memorial at Runnymede with Queen Elizabeth II.