Attorney's mug shot winds up next to his law firm's ad, in marketing effort gone awry 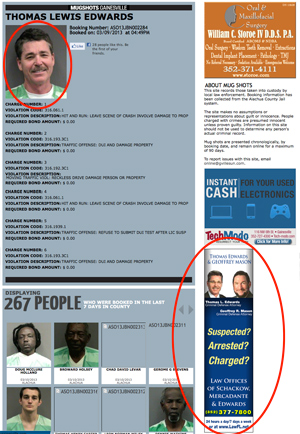 Updated: A Florida lawyer who focuses his practice on drunken-driving cases and other criminal matters got hit with a double whammy over the weekend.

First Thomas Lewis Edwards was criminally charged concerning an alleged Alachua County drunken-driving incident that involved a hit-and-run crash. Then his mug shot, showing him apparently wearing a jail-issued shirt, wound up posted on the Internet–alongside an ad for his Gainesville law firm that also features Lewis’ smiling face.

Mugshots Gainesville Florida provides a list of the six charges against Edwards, as well as, when an ABA Journal reporter pulled up the page, a copy of his law firm ad.

An earlier version of the Mugshots Gainesville page, as noted by Reddit and Gawker, put the photo of Edwards in closer proximity to the ad for his law firm.

In response to an ABA Journal request for comment, Edwards provided the following statement, through his assistant:

“Under the American criminal justice system all individuals are presumed innocent until proven guilty.”

Updated at 1:36 p.m. to include Edwards statement.