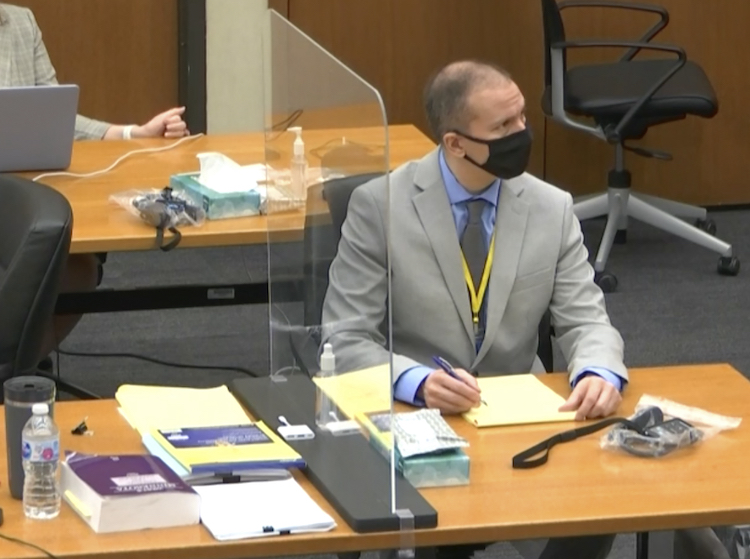 Defendant and former Minneapolis police officer Derek Chauvin in early March at the Hennepin County Courthouse in Minneapolis. Chauvin is charged in the May 2020 death of George Floyd, a 46-year-old Black man. Photo from the Associated Press/Court TV Pool.

A unique “spark of life” doctrine in Minnesota allows prosecutors to introduce evidence about George Floyd’s life in the trial of Derek Chauvin, the former Minneapolis police officer who is accused of causing his death.

Assistant Attorney General Matthew Frank has told a Hennepin County judge that he plans to show jurors photos of Floyd as a young man and call a witness to testify about Floyd’s childhood in Texas, report Reuters and the Associated Press.

Usually, such evidence can only be presented in the sentencing phase of a trial, the articles report. But prosecutors can introduce evidence in the guilt phase of the trial under Minnesota’s “spark of life” doctrine, which got its name from a 1985 Minnesota Supreme Court decision. The court ruled in that case that prosecutors could present evidence that a murder victim is “not just bones and sinews covered with flesh but was imbued with the spark of life.”

John Gross, a professor at the University of Wisconsin Law School in Madison, Wisconsin, and a former public defender in New York City, told the Associated Press that he had not encountered the doctrine.

“It’s pretty obvious how much potential prejudice that could have on the jury,” he said. “It’s a little surprising to me this is potentially fair game in Minnesota. If it isn’t evidence of guilt, why is it there?”

There is a potential downside for prosecutors, as well—something that Judge Peter Cahill of Hennepin County mentioned March 29. Cahill said if witnesses describe Floyd as a “gentle giant” or get into a propensity for peacefulness or violence, “then we’re getting into character evidence.” At that point, the defense may be able present evidence about Floyd’s criminal record, including a violent robbery conviction in 2007.

Another issue could be letting in too much “spark of life” evidence, which could give Chauvin an issue to raise on appeal.

ABAJournal.com: “Why were lawyers arguing about third-degree murder charge in case of cop charged in George Floyd killing?”