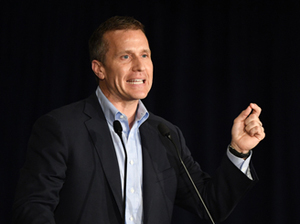 Missouri Gov. Eric Greitens has halted the execution of Marcellus Williams after lawyers for the death row inmate said DNA found on the murder weapon was not his.

About four hours before Tuesday evening’s scheduled execution, the governor said he was appointing a board of inquiry to investigate, report the St. Louis Post-Dispatch, the Washington Post and CNN.

Williams had been convicted in 2001 in the fatal 1998 stabbing of former Post-Dispatch reporter Lisha Gayle. Prosecutors claimed Williams had encountered Gayle when he was burglarizing the home and stabbed her 43 times.

Lawyers say DNA on the knife belongs to an unknown male, according to findings using technology that wasn’t available at the time of trial. Williams’ lawyers also said a footprint and hair samples found at the scene aren’t a match to Williams.

Lawyers for the state of Missouri had countered that other evidence supported Williams’ conviction. The state said Williams had confessed to two other witnesses and had sold a laptop computer taken from the home. Other personal items of Gayle’s were found in a car that Williams drove on the day of the crime. State lawyers also said Williams likely wore gloves during the burglary and killing.

Greitens, a first-term Republican, announced his decision in a statement: “A sentence of death is the ultimate, permanent punishment. To carry out the death penalty, the people of Missouri must have confidence in the judgment of guilt. In light of new information, I am appointing a board of inquiry in this case.”