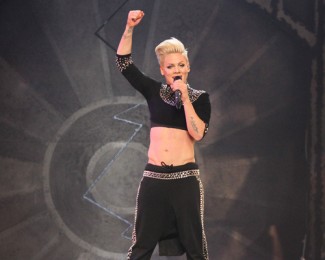 A father who saw red when he learned his 11-year-old daughter had attended a Pink concert with her mother was unable to persuade a New Jersey judge that the event was harmful.

Judge Lawrence Jones of Ocean County ruled (PDF) that taking the girl to the December 2013 concert was not an abuse of parental discretion and was not a relevant factor in the parties’ custody litigation, report the New Jersey Law Journal (sub. req.) and NJ.com. The parents, identified by pseudonyms in the opinion, had joint custody of the child, a Pink fan who told her mother she was “dying” to go to a live show.

Before taking the girl to the concert in Newark, the mother watched Internet clips of other Pink concerts on YouTube and decided they were age-appropriate for her daughter.

Jones reviewed CDs and videos of the show, part of Pink’s “Truth About Love” tour, and found that profanities were “sporadic and incidental, and not unreasonably pervasive.” He also noted that the songs addressed important social themes for young people.

One song, “The Great Escape,” addresses young people harming themselves in stressful situations and offers “a message of hope,” Jones said. In another song, “F—in Perfect,” Pink dropped the F-word in the concert. Its message is that people don’t have to be perfect and shouldn’t judge themselves too harshly for faults.

In a footnote, Jones also noted that sometimes lyrics can be hard to make out. “The reality with rock music is that in some instances, the listener cannot even clearly hear all of the lyrics and decipher what the performer singer is even singing about in the first place,” Jones wrote. “This situation may be especially true in a large concert arena involving thousands of screaming fans, where people may not even be able to fully hear and understand the person next to them, much less all of the lyrics sung by the performer.”

The father also objected to suggestive choreography and pointed to a Hollywood Reporter review that said male dancers were trying to “molest” Pink. Jones said nothing in the dancing “could even remotely or reasonable be considered ‘obscene.’ ” Though male dancers at one point appeared to be trying to grab Pink, it was in the context of a song about “an independent woman standing up to men who acted inappropriately towards her,” Jones said.

“When all the smoke from the custody litigation clears,” Jones wrote, “it will be self-evident that all which happened here is that a young girl went to her first rock concert with her mother and had a really great time.”