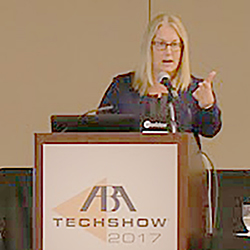 Of all the data available to lawyers, the cheapest and easiest to use is also one of the most important.

At ABA Techshow, Mary Juetten, CEO of TrakLight and co-founder of Evolve Law, spoke at length about the power of the Net Promoter Score (NPS). It tracks client satisfaction and, more importantly, whether a client would refer a lawyer to a family or friend.

In a Thursday morning session, Juetten noted that the score is still relatively underused and not highly understood. To wit: When Juetten asked the 20-plus attendees inside the conference room at the Hilton Chicago how many of them had heard of NPS, only a few hands went up. One person asked what it was.

Typically, Juetten explained, a lawyer will send out a questionnaire to a client after the engagement is finished. The survey would ask ask the client to rate, on a scale of 1 to 10, his or her satisfaction with the lawyer’s work and the likelihood that he or she would refer the lawyer to a friend or family member.

“Net Promoter Score is a hugely valuable tool for lawyers, especially because they continue to be dependent on referrals and their reputations,” said Juetten. She pointed out that NPS can be very easy and affordable to track as a key performance indicator. Often lawyers simply send a survey via email or call clients to get feedback.

One attendee even suggested offering a free Starbucks gift card to entice clients to fill out the form. “It’s the easiest, cheapest KPI,” said Juetten. “And some people will actually like that you care about their feelings.”

Lawyers also use NPS to shape their practices, helping them figure out what kinds of clients they want to pursue and whether they need to make changes.

For instance, Juetten pointed out that if certain clients are being unreasonable and give their lawyers a poor score for no good reason, then the lawyers know not to work with them in the future. Meanwhile, if clients complain about work-performance issues about certain employees or attorneys within a firm, then the firm leader will know what problems to address.

Despite that, Juetten said that lawyers are just starting to use NPS, and the scores are quite low. The most recent study from Inavero put average NPS for law firms at 17 percent, down significantly from 2016’s average of 23 percent and 2015’s mark of 32 percent.