Thomson Reuters has introduced a feature in its Westlaw Edge legal research platform called Quick Check that scans legal briefs and memoranda and then uses artificial intelligence to suggest other relevant cases to include or weak cases to omit.

Introduced July 12, Quick Check will be available to Westlaw Edge subscribers July 24 at no extra cost, Quick Check enables them to upload any document that contains at least two citations and obtain a list of authorities that are relevant to the same issue but not cited in the document. It also warns of cases that are cited but may not be good law.

At a preview for journalists Tuesday, Carol Jo Lechtenberg, director of Westlaw product management, said the feature has two main uses for lawyers. One is to upload and check their own work, such as to speed research on an early draft of a memorandum or to perform a final check on a brief before filing it. The other is to upload an opponent’s brief to analyze it for potential weaknesses or see the relevant authorities the opponent omitted.

Quick Check is similar in concept to CARA, a tool introduced in 2016 by legal research company Casetext that scans legal documents and finds relevant cases. After the American Association of Law Libraries named CARA product of the year in 2017, it spawned a number of similar products, including EVA from ROSS Intelligence, Clerk from Judicata, and Vincent from vLex.

But Quick Check differs from those other brief-analysis products in a critical way, Mike Dahn, senior vice president of Westlaw product management, said during Tuesday’s briefing. Rather than return thousands of results for attorneys to wade through, it delivers a highly efficient report of only the most relevant results.

In fact, Dahn said, Thomson Reuters had slated Quick Check to be part of the original rollout of Westlaw Edge in July 2018. But preliminary testing revealed that customers thought it was returning too many results, including too many of the cases they already had found in their research. “They wanted tight relevance that they could look at quickly,” he said.

So Dahn’s team went back to the drawing board in what he described as “one of the toughest things we’ve ever tried to do.” Because customers are experienced researchers who already use all the tools available in Westlaw Edge, he said, it was a significant challenge to deliver highly relevant cases that they had not already found.

To attack the problem, the product team worked with computer scientists from Thomson Reuters’ Center for AI & Cognitive Computing. Tonya Custis, the center’s senior director of research, echoed Dahn in describing Quick Check as “the most difficult problem I’ve worked on in my career.”

The technology that they developed, she said, draws on three factors unique to Thomson Reuters:

• Its domain expertise in legal research,

• Its engineering expertise in natural language processing and machine learning,

• And its extensive database of primary and secondary legal materials.

“To upload a motion or brief to a system and bring back a search result is an easy thing to do,” Dahn said. “We’ve gone beyond the simple way to approach this problem to focus on bringing back items that might have been missed but also to make it efficient.” 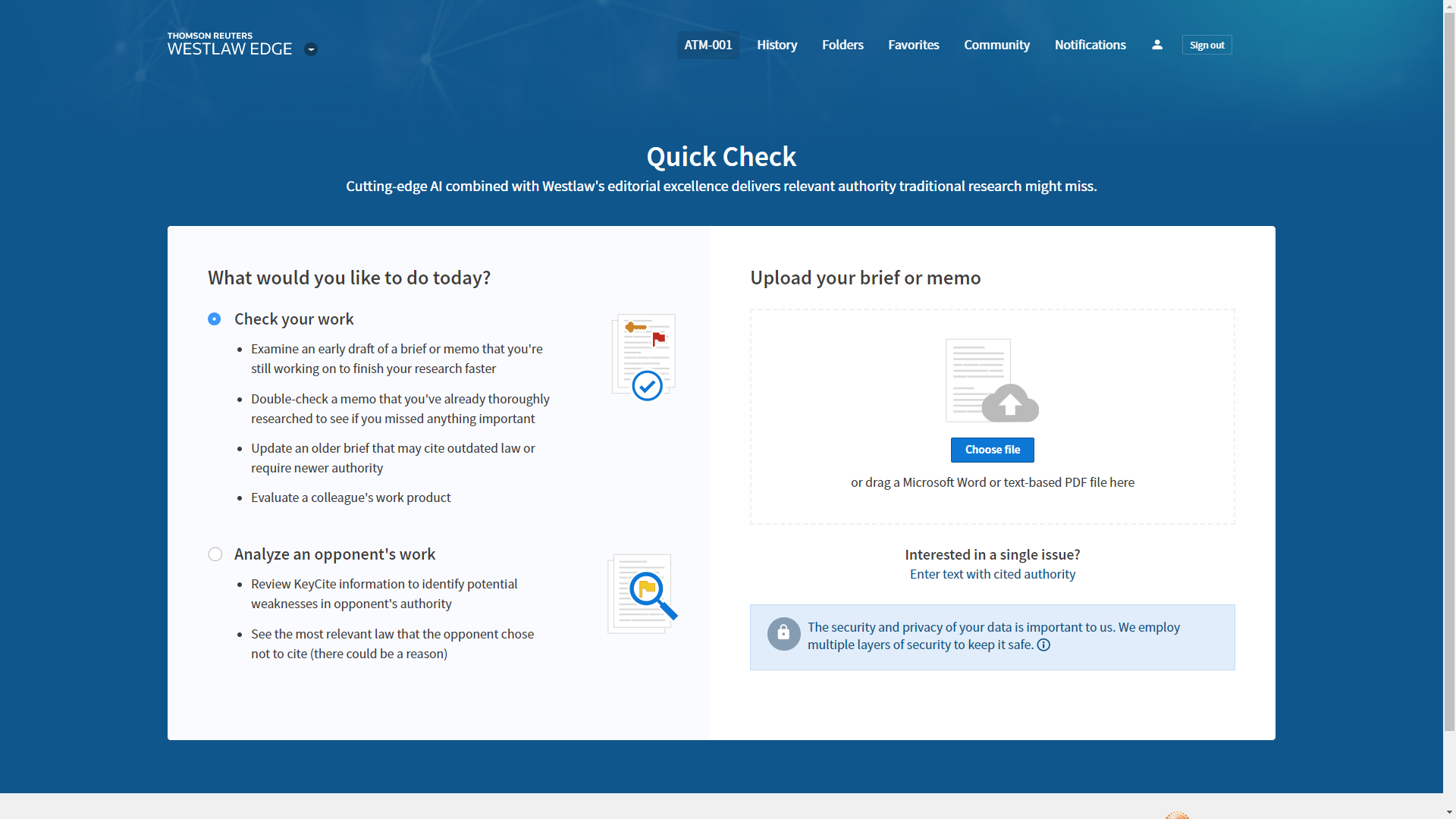