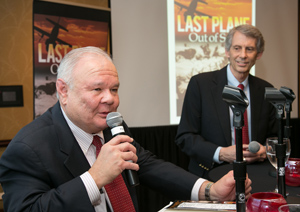 Authors Richard Pena (left) and John Hagan talk about their book Last Plane Out of Saigon at the ABA Midyear Meeting in Houston. Photo by Kathy Anderson.

In 2003, Richard Pena was on his second tour in Vietnam, leading a delegation from the People to People Ambassador Program. During a visit to the War Remnants Museum in Ho Chi Minh City (the former Saigon), he looked at a photo depicting a line of American troops boarding an airplane between rows of North Vietnamese soldiers. In the middle of the photo was a young American soldier carrying a briefcase. That soldier was Pena, and he vividly remembered the scene that unfolded 20 years earlier.

Pena had used the briefcase during his first year in law school at the University of Texas, but his legal education was cut short when he was drafted in 1970 and then slated for duty in Vietnam—not as a legal clerk, as he expected, but as a medical technician in the operating room of the last U.S. military hospital still open as this country’s involvement in the war wound down in the early 1970s.

“That briefcase was my security blanket in Vietnam,” said Pena today at a book-signing reception for Last Plane Out of Saigon, which Pena and co-author John Hagan published in 2014 through Story Merchant Books in Beverly Hills, California. The reception was sponsored by the American Bar Foundation, where Hagan is co-director of the Center of Law & Globalization, during the 2015 ABA Midyear Meeting in Houston.

In addition to the comfort he got from a seemingly mundane item from home like a briefcase—clearly, Pena was a lawyer at heart even then—he also kept a journal to help him through the lunacy of the closing days of the U.S. military’s involvement in Vietnam. The journal entries touch on a variety of topics, including Pena’s experiences at the hospital, political musings and personal reflections. “It gave my real impressions on the ground of the war and my feelings about it,” he said at the book-signing reception.

Interspersed with those entries—left largely intact 41 years after they were written—are chapters by Hagan that put the war in the context of events in the United States and around the world.

At the heart of the book is Pena’s account of that flight out of Saigon in March 1973, when he was one of the very last U.S. troops to leave the country. Two years later, the United States made its final exit when military helicopters rescued diplomatic personnel, along with a handful of Vietnamese, off the roof of the U.S. embassy. While images of that chaotic departure are familiar to Americans—Rory Kennedy’s film The Last Days in Vietnam is an Oscar nominee for best documentary film—the photo of Pena and his comrades boarding the plane is iconic to the Vietnamese.

Pena’s return to the United States and civilian life was not easy. “I was angry,” he said. “I was angry the whole time after I got back. It did pass, but I was cold. I had my walls up.”

Pena returned to law school at the University of Texas, where he received his J.D. in 1976, then went into practice in Austin, where he represents plaintiffs in personal injury and workers compensation cases. He also went on to serve as president of the Austin Bar Association, the State Bar of Texas and the American Bar Foundation, and he served on the ABA’s Board of Governors. He believes his military experience made him a better, tougher lawyer. “I don’t care what people say. What are they going to do, send me back to Vietnam?”

But Pena said his time in Vietnam also left him skeptical about America’s military involvement in more recent wars, especially in the Middle East, and he sees a tough road ahead for many veterans of those conflicts. “War is war,” he said. “It’s an insane existence, and the whole game is to survive, both physically and mentally.” Citing high rates of suicide, post-traumatic stress disorder and addiction among veterans returning from wars in Iraq and Afghanistan, Pena said, “My only advice is, ‘hold it and roll.’ That means do the best you can. Tomorrow may be a better day.”