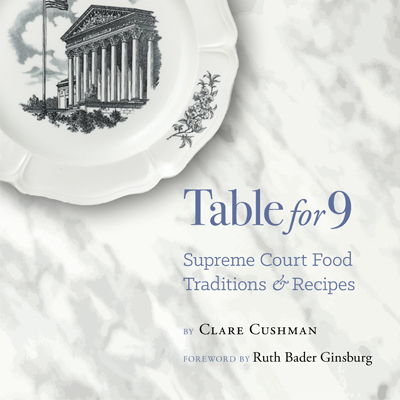 The U.S. Supreme Court often issues opinions that offer food for thought. Now, there is a new cookbook available that includes recipes associated with justices and their families.

The book, Table for 9: Supreme Court Food Traditions & Recipes, by Clare Cushman, director of publications for the Supreme Court Historical Society, is more than a cookbook, the Associated Press reports.

Besides offering more than three dozen recipes, the book provides a glimpse of justices that few get to see, including previously unpublished photos of them eating together and celebrating birthdays.

Recipes include one for pasta sauce from Maureen Scalia, wife of late Justice Antonin Scalia; a pineapple-and-coconut cake from the wife of former Chief Justice William Rehnquist; and one for marmalade from the English-born wife of Justice Neil M. Gorsuch.

Cushman says she got the idea for the book from visitors in the court’s gift shop who would ask if there was a cookbook, which some expected after having seen them at the White House visitor center’s gift shop.

“The more I researched the more I realized that this was a really substantial topic and that it wasn’t going to be fluffy or ridiculous to ask these extremely distinguished judges questions like: What are your favorite foods and what do you eat for lunch?” Cushman told the AP.

The book is available for pre-order at the court’s gift shop and online through the Supreme Court Historical Society’s website.